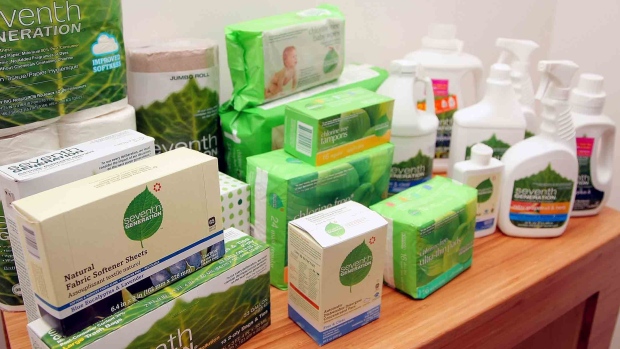 (Bloomberg) -- The executives tasked with introducing Seventh Generation’s line of eco-friendly laundry detergents, dish soaps and cleaners to Southeast Asia faced a dilemma earlier this year. If the Unilever NV unit proceeded with the planned product launch before enough recycled plastic could be found for packaging, it could undercut sustainability goals tied to 20% of employee bonuses. Picking a non-recycled material could cost them all a chunk of money.

“If you don’t have access to recycled resins, then we just won’t launch,” Seventh Generation Chief Executive Officer Joey Bergstein said the company decided at the time. His team eventually found suitable material from the region’s fledgling recycling infrastructure, and Seventh Generation hit store shelves there without lowering standards—or bonuses. The search paid off for Unilever, too, with the same supplies of recycled resins going into the packaging of the European consumer giant’s other brands in Southeast Asia.

Most large companies now set sustainability goals, but few impose consequences on employees who fail to meet them. Around 500 corporations worldwide tie executive pay to environmental, social or governance goals, according to data compiled by Bloomberg. Not all of these are related to climate impact—diversity and safety are more prevalent than environment targets among this group.

That’s beginning to change. “It’s is coming up more and more, but five years ago this wasn’t part of the conversation,” said Seymour Burchman, a managing director at Semler Brossy, a consultant that advises on compensation plans. With companies creating better data around environmental impact and risks, he said, the case for linking compensation gets stronger. “The board can’t ignore it.”

The employers that most often link compensation to environmental impact aren’t crunchy consumer brands like Seventh Generation but gritty miners. Extractive industries need to measure environmental impact to get licenses required to operate in local communities, and Burchman said that incentive pay has been an effective way for miners to improve these results.Cameco Corp. links 40% of annual bonuses to safety, environment and community measures. Vale SA started linking emission reductions to annual bonuses in 2018. Rio Tinto Plc said in April it was considering how to link greenhouse gas cuts to short-term incentive plans. BHP Group—the world's largest miner—said Tuesday it will increase the amount of short-term incentives CEO Andrew Mackenzie has tied to carbon emissions reductions and climate metrics in 2020 from 4% currently.

As more companies reckon with their carbon footprints and face pressure to embrace renewable energy, links between climate-related targets and compensation are spreading. General Motors Co. CEO Mary Barra had seven sustainability objectives last year, including reaching 200,000 electric vehicle sales in the U.S. GM’s proxy statement denoted each one with a little green leaf, alongside other traditional financial goals for CEO pay like revenue, dividends and share repurchases. There are other executives at the Detroit automaker with sustainability goals included in their compensation, although a GM spokeswoman didn’t say how far these targets extend down the line.

Climate goals for executive pay are more common in Europe, where companies like Novozymes A/S, the Copenhagen-based maker of industrial enzymes, gives each employee his or her own incentives for meeting financial, social and environmental targets. Food and beverage maker Danone SA bases about 10% of CEO Emmanuel Faber’s pay on meeting climate commitments and creating a sustainable supply chain.

Sustainability is increasingly creeping into traditional financial incentives for companies — and even their suppliers.  Walmart, for example, has pledged to cut a gigaton of greenhouse gases out of its business by 2030, extending all the way into its supply chain. Earlier this year, in an effort to spur suppliers to do better, Walmart offered better financial terms to anyone who delivered on green goals. Walmart specifically links diversity and culture to 15% of executive incentive pay and 10% of pay for associates, but doesn’t break out environmental goals in its proxy.

In the credit markets, nearly $70 billion of green- and sustainability-linked loans were issued this year, according to data compiled by Bloomberg. The loans let companies lower the cost of their debt if they meet specific sustainability targets.

At Seventh Generation, the entire workforce sees pay change along with company-wide sustainability metrics. That puts the unit on the far end of adoption, which makes sense for an environmentally-minded consumer brand. “When you bake it into the incentive system people really feel compelled to go after it,” said Bergstein, the chief executive.

Meeting goals on packaging and greenhouse-gas reduction prompted the launch of an ultra concentrated laundry detergent in 2018. The detergent weighs less, which the company claims will cut emissions from shipping by about 70%.

Scientists working for Seventh Generation, however, have concluded that 92% of the company’s greenhouse-gas footprint stems from people washing and drying clothes at home—something very difficult for executives to change. Working with manufacturers to design washing machines that are more efficient didn’t seem like it would address that problem fast enough. So the company took an unorthodox approach.

Seventh Generation set a target that 100 U.S. cities would need to pledge to shift to clean energy by 2030. If they didn’t, employees would lose out on incentive pay. Bergstein will admit that it sounds crazy: “What kind of control do we have over 100 cities across America to make that kind of commitment?” he said. “But we looked at each other and said if we’re really serious about cleaning up the energy grid, then we’ve got to do something like this.”

Seventh Generation spent $1 million on lobbying efforts and worked with the Sierra Club and other groups to sway local officials. It worked — and its 160 employees got to keep their bonuses. “It would have been a lot easier to take that $1 million and spend it elsewhere,” Bergstein said. “But it really keeps your feet to the fire.”

This story is part of Covering Climate Now, a global collaboration of more than 250 news outlets to highlight climate change.

To contact the editor responsible for this story: Aaron Rutkoff at arutkoff@bloomberg.net, Tim Quinson