A look at Canada's legal pot market, one year in

Pot legalization was supposed to eliminate the black market, boost Canada’s economy and enrich investors. It hasn’t quite turned out that way.

A year after the country became the first major economy to legalize recreational cannabis, pot stocks have lost more than half their value, retail prices are nearly double those in the illicit market, sales are well below expectations and most companies are losing money.

To be sure, creating a national market from scratch was never going to be easy and the highly regulated model has attracted plaudits from around the world. But few in the industry are prepared to call the first year a success, and plenty of challenges lie ahead as new products like vapes and edibles join dried flower on store shelves in December.

Below, we separate the reality from the hype ahead of the October 17 anniversary:

In June 2018, four months before legalization, Deloitte LLP predicted that legal pot sales would be as high as $4.34 billion in 2019. Not so much.

Canadians bought $524 million of legal weed in the first seven months of 2019, according to Statistics Canada. Sales have steadily increased since February as more retail stores have opened, but major suppliers like Aurora Cannabis Inc. have warned that revenue is likely to plateau in the fourth quarter before the new forms of the drug become available for sale. 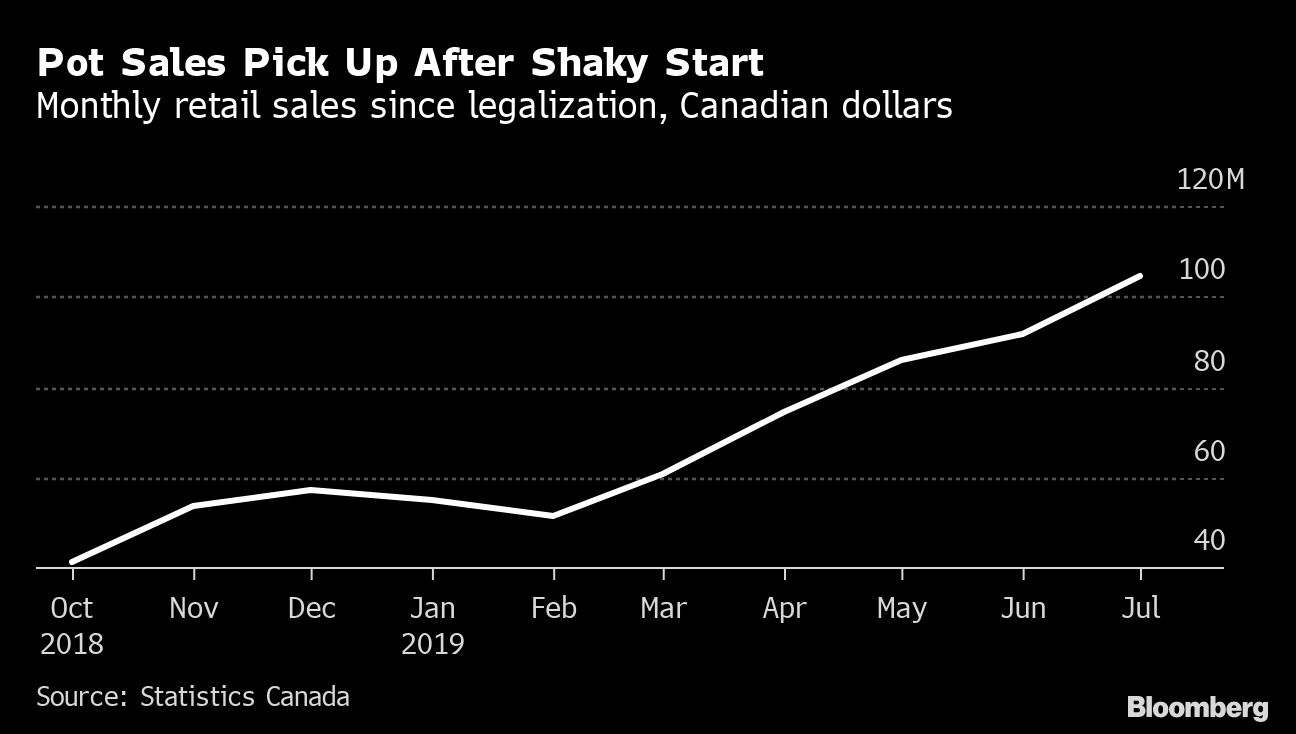 “Probably the biggest disappointment’s been the rollout of retail,” said Bruce Campbell, founder of StoneCastle Investment Management Inc., which manages the StoneCastle Cannabis Growth Fund. “It’ll probably be six or 12 months before we get broad retail, and that trickles down to everything else.”

Ontario and Quebec, Canada’s two most populous provinces with nearly 23 million people between them, only have 25 stores each, leaving a large chunk of Canada’s population under served by physical stores.

The reasons for the dearth of storefronts are often political. Ontario’s government delayed the province’s store rollout for nearly six months after legalization to consult with stakeholders and develop legislation, and then blamed the federal government for a lack of supply when it limited the initial number of locations to 25.

Whatever the reasons, the impact is real. Provinces with more bricks-and-mortar stores had sales per capita nearly 2.5 times higher than their counterparts with fewer stores, according to Eight Capital analyst Graeme Kreindler.

Another reason for slower-than-expected sales is the fact that consumers are being asked to pay nearly twice as much per gram in the legal market than the black market -- for less choice.

The average price for a gram of legal pot fell 3.9 per cent to $10.23 in the third quarter from the second quarter, the first drop since pot was legalized on Oct. 17. But that remains nearly twice as high as black-market prices, according to Statistics Canada.

And only dried flower and oils are currently available in the legal market. This leaves the black market to profit from popular formats like edibles and vapes until they begin to hit legal store shelves later this year. A Statistics Canada survey found 42 per cent of pot consumers purchased at least some of their pot from illegal sources in the second quarter.

“Eventually the black market will be replaced by the legalized market, but the question is whether that takes two years or five years or 10 years,” Campbell said.

Investors are hankering for companies that can turn a profit but those are still few and far between. Of Canada’s six biggest companies by market value, five have recently disappointed the market, sending their stock prices tumbling. Here are a few examples:

“The lunch-bag letdown is that there are more companies that are focused on long-term growth than they are on becoming profitable in the near term,” said Charles Taerk, CEO of Faircourt Asset Management, which acts as an adviser for the cannabis-focused Ninepoint Alternative Health Fund. “Building an empire doesn’t necessarily translate to profitability.”

Losses haven’t been the only thing weighing on pot stocks. CannTrust Holdings Inc.’s regulatory breach led to the firing of its CEO, a joint investigation by securities regulators and police and the suspension of its cannabis license. It also raised serious questions about the trustworthiness of pot companies and the ability of Canadian regulators to properly oversee the sector.

In addition, a growing vaping-related health crisis is generating scary headlines just before the first legal cannabis vapes hit Canadian shelves. All these issues are making it increasingly difficult for companies to raise money, and have cut the value of pot stocks by more than 50 per cent since their recent highs in March of this year.

This has been particularly hard on smaller companies that don’t have the capital cushions of their larger peers.

“There’s a growing separation between the haves and the have-nots,” Taerk said. “The ability to raise capital is now becoming more challenging for those companies that have not been able to prove their model.”

Green Organic Dutchman Holdings Ltd., for example, tumbled almost 40 per cent over two days last week after it said it was unable to secure traditional sources of financing on “acceptable terms.” Without financing, the company said it may be forced to revise its construction schedule for two facilities in Ontario and Quebec.

“In order to survive, cannabis companies are left with few good options,” Seaport Global Securities analyst Brett Hundley said in a recent note. “We think a major shakeout is on the horizon.”

While Canada struggles to develop a functional market post-legalization, the U.S. is quietly eroding its neighbor’s first-mover advantage.

U.S. cannabis companies’ stocks have been battered too, but several analysts say they’re likely to rebound faster and further than their Canadian counterparts. The biggest U.S. multi-state operators, or MSOs, are already generating more revenue than many of their Canadian peers, and there are a bevy of potential catalysts around the corner that could send them soaring.

“For the U.S. MSO group, we see a completely different set of circumstances in place, and we would broadly recommend that investors rotate away from Canada and towards the U.S.,” Brett Hundley, analyst at Seaport Global Securities, said in a note published Monday.

The SAFE Banking Act became the first major piece of pro-cannabis legislation to pass the House of Representatives last month, and many other bills that would make life easier for pot firms are working their way through the legislative process. In addition, major states like New York and New Jersey are expected to legalize recreational use by next year, and many believe it’s only a matter of time before the federal government implements some form of legalization as well.

Yet changes are coming to Canada’s market which should buoy the industry. Canada’s legal store count is expected to grow significantly in coming months, with Ontario alone set to open 50 new stores beginning later this year.

Companies are also hopeful that the addition of edibles, beverages, vapes and topicals to the roster of legal products will attract new consumers and boost their sales and margins.

And most of Canada’s big pot producers have established a significant international presence that could help to offset any ongoing weakness in the Canadian market as legalization spreads around the world.

“Everyone is so negative on what’s happening but I suspect that will turn because this is and will be one of the fastest-growing businesses in the next 10 years globally,” said StoneCastle’s Campbell. “It’s just a function of who wins and who loses.” 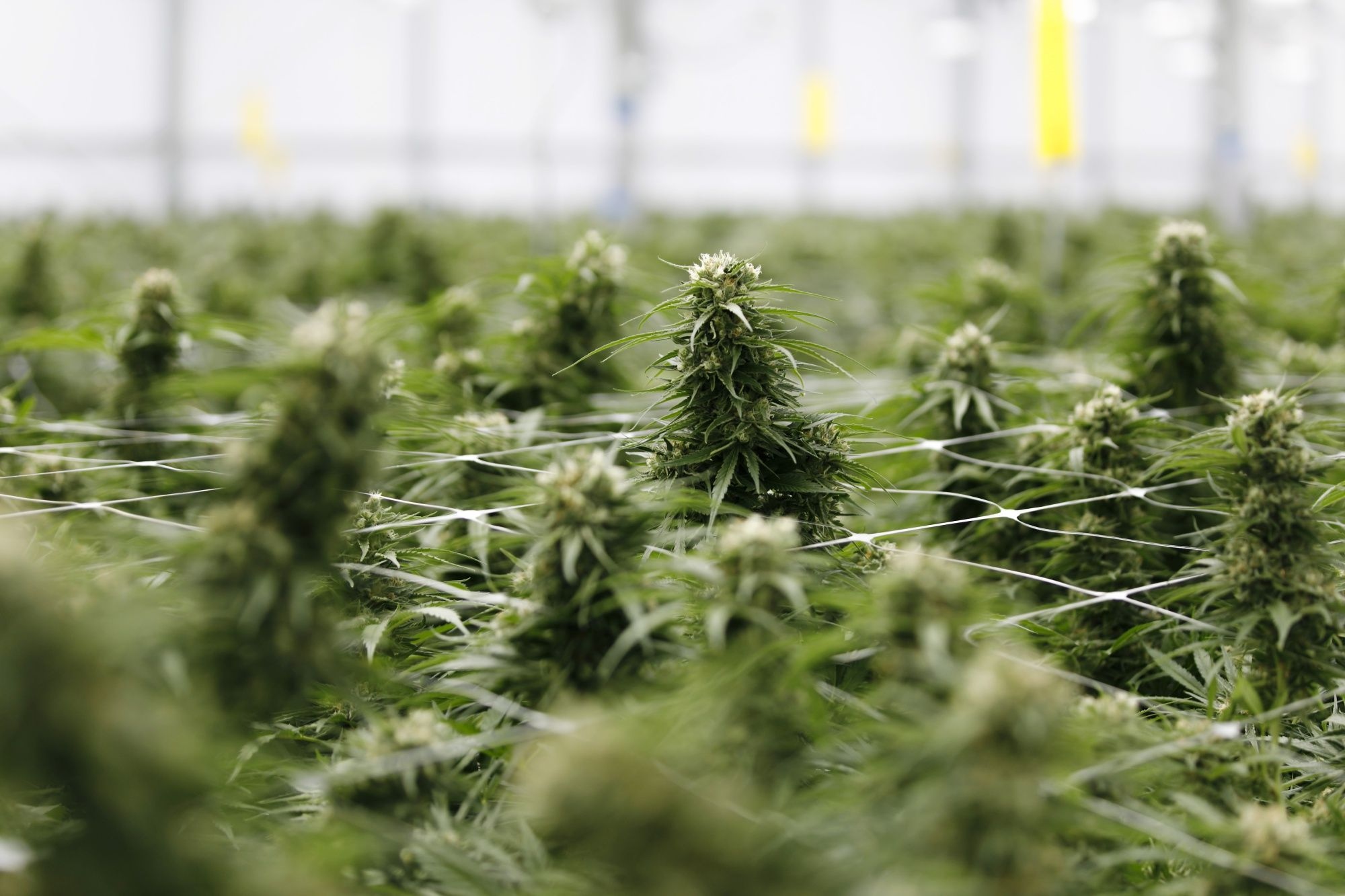 Which of these do you think Canadian cannabis producers should prioritize?