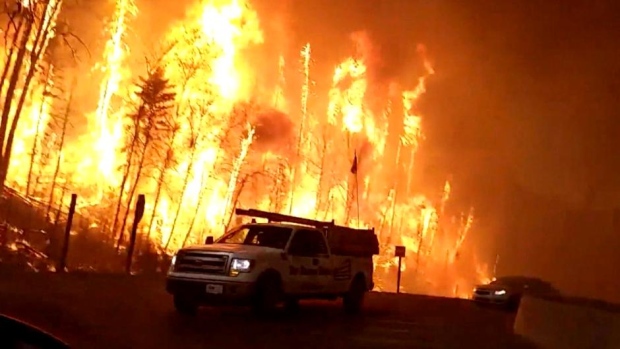 FORT MCMURRAY, Alta. - It has been one year since a wildfire destroyed large parts of Fort McMurray. Here is a look back at how events unfolded:

May 1 - A fire starts in a remote part of forest southwest of Fort McMurray. Investigators don't know how it started, but note that most spring wildfires are caused by people. A dry, warm spring and trees that are still greening make for lots of fuel. It is spotted by helicopter fire patrol. Helicopter begins working the fire immediately. The first air tanker arrives 45 minutes later, then three others arrived from Lac la Biche, Peace River and Whitecourt. Two tankers stayed the night in Fort McMurray to be ready to go the next morning.

May 1, 7:08 p.m. - The Alberta Emergency Alert system warns people who live in Fort McMurray's Gregoire neighbourhood to prepare to evacuate on short notice.

May 1, 10:33 p.m. - A state of local emergency is declared and a mandatory evacuation order is issued for Gregoire as well as for Centennial Trailer Park south of Airport Road.

May 2, 3:37 a.m. - The mandatory evacuation notice for Gregoire is reduced to what is called a voluntary, shelter-in-place notice and people are allowed to return. The 700 residents from the trailer park as well as another neighbourhood, Prairie Creek, remain out of their homes.

May 2, during the day - Aircraft drop fire retardant and ground crews work to protect homes. The fire is one-square-kilometre in size. "We are hopeful that we can stop this fire before it gets into town," says Wood Buffalo fire Chief Darby Allen. The fire is within one kilometre of homes at points, but the wind is pushing it away from the city. The evacuation order for Prairie Creek is lifted in the evening. "All things considered, it is looking good," says Mayor Melissa Blake.

Overnight on May 2 and the morning of May 3 - The fire grows to 26 square kilometres, but is still moving away from the city. Life in Fort McMurray seems relatively normal. Allen warns people not to let their guard down.

May 3, 10:30 a.m. - A change in normal atmospheric conditions, called an inversion, breaks. This, coupled with temperatures in the range of 30 C, low humidity and shifting winds, causes the fire to explode.

May 3, 2:25 p.m. - Flames are heading toward the city and huge plumes of smoke are visible. Residents of three south-side neighbourhoods are ordered from their homes. There's shock at how quickly the situation has deteriorated: "When I got in the shower earlier today the sky was blue. When I got out, the sky was black," says resident Sandra Hickey.

May 3, 3:45 p.m. - There's chaos on the city's south side as people flee towering walls of orange flame that are charging into neighbourhoods. Residents are told to head either north or south, depending on their location, on the one highway through town. The evacuated trailer park is on fire. Flames are advancing towards a Super8 motel and a gas station. "People are panicking. It's gridlock on the roads," says Carina Van Heerde, a reporter with radio station KAOS.

May 3, 5:22 p.m. - Alberta Premier Rachel Notley says the province is doing all it can to ensure everyone's safety. Scott Long of Alberta Emergency Management says the flames have burned a number of structures, but he can't say how many.

May 3, 6:31 p.m. - All of Fort McMurray is placed under a mandatory evacuation order.

May 3, 10:20 p.m. - Emergency officials say whole neighbourhoods have been destroyed. Still, there are no reports of serious injuries. Crews are trying to maintain crucial infrastructure, including the only bridge across the Athabasca River and Highway 63.

May 4, morning - Highway 63 leading south is "organized confusion." Cars are strung along ditches and police are running jerry cans of gasoline to drivers who have run out. To the north of the city, thousands have taken refuge in oilsands work camps.

May 4, 3:57 p.m. - The Alberta government declares a provincial state of emergency so it can take control of the response.

May 5, noon - The fire has ballooned to more than 850 square kilometres.

May 6, 6 a.m. - A massive convoy gets underway to move evacuees stranded at oilfield camps north of Fort McMurray through the fire-ravaged community to safe areas south of the oilsands capital.

May 6, morning - The Alberta government says it will provide cash to 80,000 evacuees to help with their immediate needs. Notley says cabinet has approved a payment of $1,250 per adult and $500 per dependant at a cost to the province of $100 million.

May 7 - The fire is more than 2,000 square kilometres in size and still growing as it spreads east toward the Saskatchewan boundary.

May 9 - Notley says 2,400 buildings were lost in the fire, but she praises firefighters for saving 25,000 more. Reporters are taken on a tour of devastated neighbourhoods.

May 10 - Notley says the fire did not damage any oilsands plants to the north of the city. She says the province and the energy industry are working together to restart oilsands projects as quickly as possible.

May 11 - The Red Cross says each adult evacuee is to receive $600 and each child will get $300 to help with expenses.

May 13 - Prime Minister Justin Trudeau tours the city. He says Canadians have yet to grasp the scope of what happened and the lengths firefighters went to in saving almost 90 per cent of Fort McMurray.

May 16 - Notley says the air quality in Fort McMurray is at dangerous levels and is hampering efforts to get residents back to their homes. The air quality heath index scale is normally one to 10, with 10 being the worst, but the reading that morning was at 38. Fire officials say the blaze, now at 2,850 square kilometres, remains out of control and a threat as crews deal with hotspots.

May 16, 4:45 p.m. - Work camps north of Fort McMurray that had been re-populated as the oilsands attempted to restart are cleared again as the wildfire pushes north.

May 17 - The fire destroys a 665-room work camp north of the city. An explosion in the city damages several houses and the restoration of gas services needs to be stopped. Poor air quality forces staff working to clean the hospital to leave the city.

May 18 - The Alberta government says people could return home starting on June 1 if conditions are deemed to be safe. The wildfire has now scorched more than 3,500 square kilometres as conditions remain dry and windy.

May 19 - Officials say the threat of the Fort McMurray wildfire has diminished as the flames move into Saskatchewan. Crews have been successful holding the fire back from oilsands facilities and work camps. The blaze has now burned 5,000 square kilometres, the same amount of forest as all fires consumed in Alberta last year.

May 20 - Conditions have improved enough for the province to bring in an extra 1,000 firefighters over the next two weeks to try and gain an upper hand on the fire.

May 24 - Oilsands workers begin the process of restarting their projects.

May 30 - Re-entry remains on track, but Notley says up to 2,000 evacuees will not be able to do so until possibly September. She says more than 500 homes and about a dozen apartment complexes that escaped the wildfire in three otherwise heavily damaged neighbourhoods are not safe to be lived in yet. She says that conclusion was reached with health experts following tests on air, soil, ash and water.

June 13 - The wildfire is classified as being held for the first time since it became out of control.

June 15 - Alberta orders reviews into how it responded to the wildfire and decisions about the evacuation.

July 4 - The fire is classified as under control.