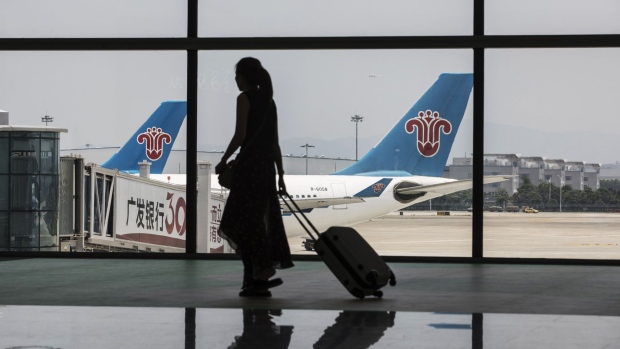 A woman carrying luggage is silhouetted as she walks past aircraft operated by China Southern Airlines Co. sitting on the tarmac at Terminal 2 of the Guangzhou Baiyun International Airport in Guangzhou, China, on Saturday, May 19, 2018. China Southern will ramp up flights to Europe and North America from the country's top-tier cities to challenge the dominance of rival Air China Ltd. Photographer: Qilai Shen/Bloomberg , Bloomberg

(Bloomberg) -- Oneworld, the global airline alliance led by American Airlines Group Inc. and British Airways, is in discussions about bringing China Southern Airlines Co. into its ranks, according to people familiar with the matter.

China Southern is the nation’s largest airline with dual hubs in the capital Beijing and the southern city of Guangzhou, where it is headquartered. Bringing it into the oneworld Alliance could provide other member airlines with valuable access to what prior to Covid was one of the world’s fastest growing aviation markets, the people said, asking not to be identified because the details are private.

China Southern has been forging ties with a number of carriers, several of them oneworld members, after it announced its split from rival grouping SkyTeam in 2018. SkyTeam counts Delta Air Lines Inc. as a key member. American Airlines and Qatar Airways both hold stakes of around 5% each in China Southern, which also has an extensive commercial partnership with British Airways and a codeshare agreement with Finnair Oyj.

A representative for oneworld said “with respect to other prospective members, at any point in time, we are in dialog with potential candidates but do not comment on any specifics until those discussions have reached a level of maturity where public announcements can be made.”

“With international travel recovering from the pandemic, alliances have become even more important by offering global connectivity for airlines and their customers,” it added.

British Airways and American Airlines have been the most vocal and active carriers pushing to convince fellow oneworld members of the benefits of China Southern’s membership, although no formal application has been made, some of the people said. Any final decision will rest with the Chinese carrier.

One complicating factor around the talks has been China’s Covid Zero policy, which has meant executives from the airlines and the alliance haven’t been able to go to China for face-to-face discussions with China Southern management, one of the people familiar said.

Over the 25 years since the founding of the first global alliance, most of the world’s major airlines have coalesced into three major groupings that help bolster marketing efforts, maximize ticket sales and broaden access to a wider range of routes.

For passengers, the alliances extend perks and rewards including air miles, lounge access, speedy check in and increased luggage allowances across multiple airlines.

Some exceptions, such as Emirates and Etihad Airways, both Gulf carriers, have eschewed membership, though, choosing to forge codeshares or lucrative joint venture pacts on a case-by-case basis.

--With assistance from Christopher Jasper.