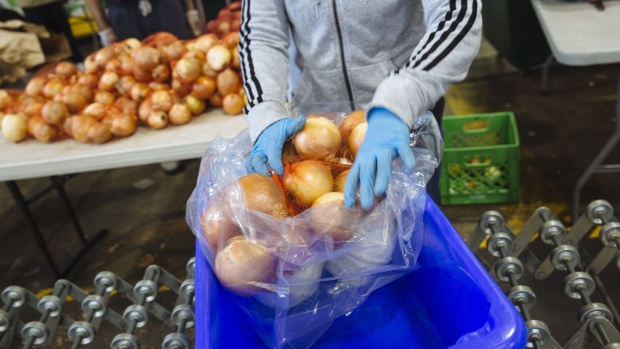 A worker wearing gloves places onions into a bin at a City Harvest facility in the Long Island City neighborhood in the Queens borough of New York, U.S., on Monday, May 7, 2020. New York State is working with farms to buy their products and send them to food banks. "A lot" of farms upstate can't sell their products while people downstate are going hungry, Governor Andrew Cuomo said. Photographer: Angus Mordant/Bloomberg , Bloomberg

The Centers for Disease Control earlier this week advised people not to consume onions imported from Chihuahua and to throw out all unlabeled red, white and yellow onions after reports of illness linked to onions in 37 states.

Keeler Family Farms of Deming, New Mexico, which distributes onions in all 50 states and the District of Columbia, voluntarily recalled supplies imported from Chihuahua on Friday, the FDA said. Though the investigation into the outbreak is ongoing, no onions marketed by the distributor have tested positive, the FDA said.

Idaho-based Prosource Inc. recalled onions from the Mexican state earlier this week after one source of infection was traced to its supplies, according to the CDC. More than 200 of the 652 reported cases have required hospitalization.