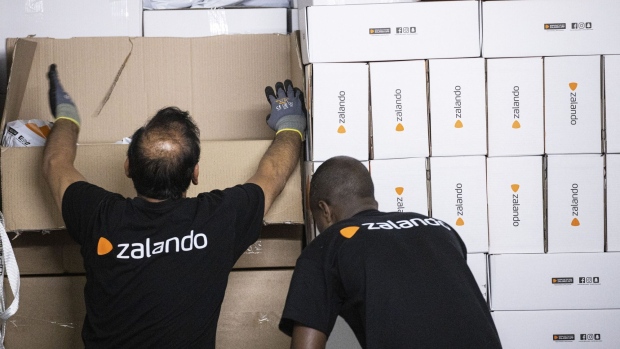 Employees load a delivery truck with branded boxes inside the Zalando SE online shopping logistics and fulfillment center in Erfurt, Germany, on Thursday, Aug. 15, 2019. Buying clothing online is popular in Europe's largest economy, but it's also the category that gets returned the most because many shoppers buy more than they need to try on different garments in the comfort of their own home. Photographer: Alex Kraus/Bloomberg , Bloomberg

Revenue should increase as much as 19% to 12.3 billion euros ($13.8 billion) in 2022, the Berlin-based company said Tuesday, saying that it expects to outperform the market. Analysts had been expecting 12.2 billion euros. The forecast excludes any potential negative impact from the war in Ukraine, and the low end of the range is 11.6 billion euros.

Zalando and rivals have benefited from a rise in demand during the pandemic as consumers confined to their homes shopped online. Revenue last year jumped 30% to 10.4 billion euros. The company’s main markets are Germany, Austria and Switzerland, and it also entered six countries across eastern Europe last year including Croatia and Lithuania. Zalando doesn’t operate in Ukraine.

The company has been persuading more brick-and-mortar stores to use its site to sell apparel, bolstering its push to become a platform for all things fashion. The company said last year it’s hoping to serve more than 10% of Europe’s fashion market estimated to be worth 450 billion euros in the long term.

The shares have lost a third of their value in the past year.