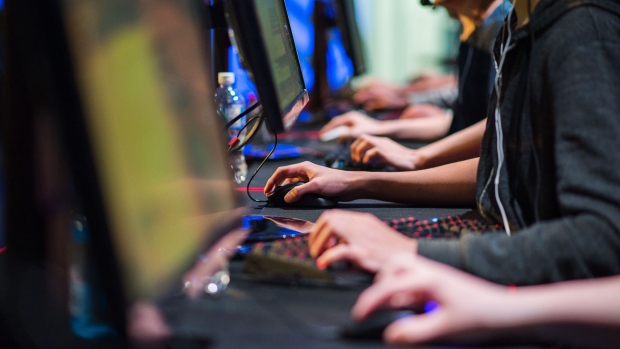 Gamers compete in a Valve Corp. Counter-Strike: Global Offensive (CS:GO) esports tournament at the Gaming Stadium in Vancouver, British Columbia, Canada, on Sunday, July 14, 2019. Esports revenue, consisting of merchandise, event tickets, sponsorships, advertising, investment from publishers and media rights -- all beyond game sales -- is expected to rise at a 20% average annual rate in 2018-22 to $1.8 billion in 2022, according to Newzoo. Photographer: James MacDonald/Bloomberg , Bloomberg

VANCOUVER -- A public inquiry into money laundering in British Columbia has heard that cash is still king but cryptocurrencies and other virtual trade could rise as a trend.

Criminology professor Stephen Schneider of St. Mary's University in Halifax says games and other online platforms with many players are creating their own forms of currency with real value attached.

He says in games like "Second Life," the currency can be used to purchase virtual products or advance to the next level, but he warns that it can also be used to launder the proceeds of criminal activity.

At the same time, Schneider says that while there have been a small number of cases of cryptocurrencies like Bitcoin being used in the drug trade, cash remains the preferred payment.

He says smaller denominations of $20 and $50 bills are most common, even in very large transactions.

Schneider is the first expert witness to give testimony before commissioner Austin Cullen in the portion of the public inquiry that will get an overview of money laundering and regulatory models over the next 3 1/2 weeks.

"It's not unusual to have multi-kilos of cocaine or marijuana being purchased with stacks of $20 bills," Schneider says.

Criminal entrepreneurs, drug traffickers and organized crime have developed money laundering as a "tactical imperative" to avoid suspicion, he says.

"In order to enjoy the fruits of their labour they need to be able to take that cash and try to convert it into more of an asset that's less suspicious all the while trying to hide the illegal source."

The inquiry heard opening arguments in February and will focus on specific industries at hearings beginning in September.