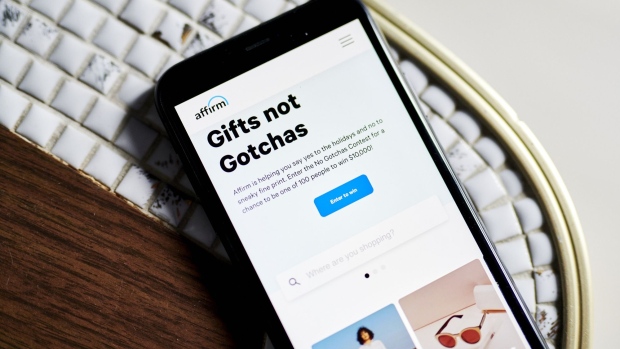 Affirm Holdings Inc., which provides installment loans to online shoppers, is seeking to raise as much as US$934.8 million in an initial public offering, signaling last year’s record listings run is carrying over to 2021.

The San Francisco-based company said in a filing Tuesday that it planned to sell 24.6 million shares for US$33 to US$38 each.

The company expects to make its trading debut on Jan. 13, said a person familiar with the matter who asked not to be identified because it wasn’t public. A representative for the company didn’t immediately respond to a request for comment.

The company’s value could still change after discussions with potential investors during the roadshow for its IPO.

Affirm follows consumer technology companies including Airbnb Inc. and DoorDash Inc. that propelled IPOs on U.S. exchanges last year to a record of more than US$179 billion. Affirm had planned to go public in December but delays at the U.S. Securities and Exchange Commission pushed back its listing, people familiar with the matter have told Bloomberg News.

More than 6,500 merchants use Affirm’s platform, according to its prospectus filed with the U.S. Securities and Exchange Commission. After selecting their purchases, shoppers can choose a schedule for paying for them at an annual interest rate of 0 per cent to 30 per cent, according to Affirm’s website.

Home exercise company Peloton Interactive Inc. was by far Affirm’s most important merchant partner, accounting for 30 per cent of its total revenue in the third quarter. Its top 10 merchants including Peloton produced about 37 per cent of Affirm’s revenue during the period, creating the risk its business could be adversely affected by the loss of any of those partners, according to the filing.

Affirm was founded in 2012 by Max Levchin, who also co-founded PayPal Holdings Inc. Levchin is the company’s single biggest shareholder, according to the filing. Other large owners include Jasmine Ventures, Khosla Ventures, Founders Fund, Lightspeed Venture Partners and Shopify Inc.

The company said its Class B shares will carry 15 votes each, while the Class A shares sold in the IPO will have one vote each. Levchin will control almost 20 per cent of the voting power after the offering, according to the filing. At 8.6 per cent, Jasmine Ventures will control the next largest voting block.

The offering is being led by Morgan Stanley, Goldman Sachs Group Inc. and Allen & Co. Affirm plans to list its shares on the Nasdaq Global Select Market under the symbol AFRM.