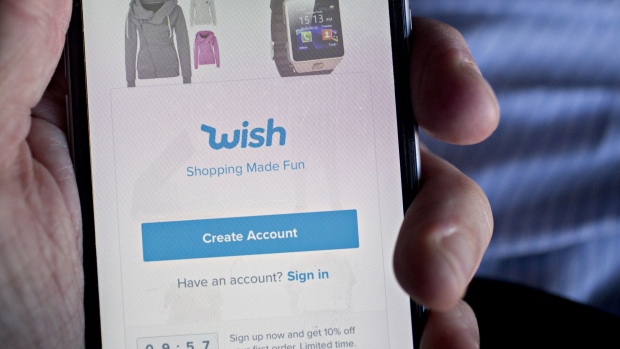 The Wish application is displayed on an Apple Inc. iPhone in an arranged photograph taken in Washington, D.C., U.S., on Wednesday, July 18, 2018. Wish, reportedly valued at more than $8 billion, has built one of the fastest-growing e-commerce businesses today by offering a dizzying range of products that sometimes sell for as much as 90 percent off regular prices. , Bloomberg

Online retailer Wish has filed for a U.S. initial public offering, joining the rush of consumer technology companies seeking to go public before the end of the year.

Wish’s parent company, San Francisco-based ContextLogic Inc., plans to list on the Nasdaq Global Select Market under the symbol WISH, according to a filing Friday with the U.S. Securities and Exchange Commission. It listed a potential offering size of US$1 billion, a placeholder that will likely change.

Goldman Sachs Group Inc., JPMorgan Chase & Co. and Bank of America Corp. are leading the IPO, according to the filing.

While Wish filed confidential paperwork for its IPO in August, this is the first chance potential investors have had to scrutinize its financial performance.

The company joins a glut of consumer-facing tech companies that are aiming to hold their IPOs before the end of 2020. Home-rental giant Airbnb Inc., food delivery company DoorDash Inc., online loan provider Affirm Inc. and video-game platform Roblox Corp. have all filed this month to go public.

Founded in 2010 by Chief Executive Officer Peter Szulczewski and Danny Zhang, who met at the University of Waterloo in Ontario, Canada, Wish is an online marketplace that connects sellers to potential buyers of everything from clothing to electronic goods and kitchenware. ContextLogic owns other online marketplaces, including Geek, Mama, Home and Cute, according to the Wish website.

It differentiates itself by focusing on “value conscious consumers” who it says have been underserved by traditional e-commerce players, according to its filing.

Wish said that most of its vendors are in China, although it’s trying to expand its roster of local suppliers. It mentions “economic tension between the U.S. and China” as a risk that could impact its business.

Like many technology companies looking to go public, Wish has a dual-class share structure giving more voting power to its founders. Its Class B shares will carry 20 votes each, compared with one each for the Class A shares sold in the IPO.