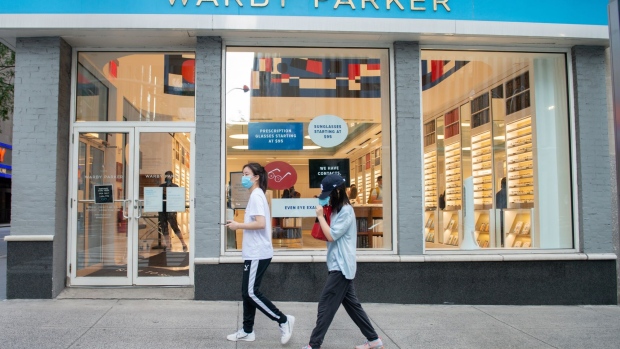 (Bloomberg) -- As Warby Parker heads toward becoming a public company, the co-founders of the eyewear brand valued at $3 billion are pitching a growth strategy centered on stores.

It’s quite a turn for a company that last decade ignited a boom in digital brands that convinced investors to bet billions largely on their ability to grow quickly online.

But in this category, where sales of glasses and contacts still depend on customer relationships with eye doctors in physical locations, Warby Parker plans to greatly expand its store fleet of about 140. For starters, another three dozen locations will open by the end of this year, the company said.

“There’s still room for us to open hundreds of stores,” Neil Blumenthal, a Warby Parker co-founder and its co-chief executive officer, said in an interview. “When we look at our competitors—the large public optical retailers—they all have well over a thousand locations across the U.S. At the end of the day, the vast majority of Americans need glasses and prefer to buy those in person.”

Warby Parker is now 11 years old, and growth isn’t as easy. There’s more competition, both from online brands, such as Zenni, and entrenched players, like Pearle Vision, that have improved their e-commerce. The company hasn’t had to release financial results as a private company, but data from Bloomberg Second Measure show the retailer’s sales growth nearly doubled in 2013 and then slowed down.

From 2016 to 2019, annual gains averaged about 25%. And during 2020, growth was about 7% before rebounding this year, according to Second Measure, which analyzes anonymous credit card transactions.

“They’ve been around for a while, and people who would have had a proclivity to try them by now already have,” said Sucharita Kodali, a retail analyst at Forrester. “Their biggest challenge is growth. How do you find the next tranche of customers?”

Investors have poured about $530 million into Warby Parker, including a series G funding round of $120 million in August, according to researcher CB Insights. The company confidentially filed an initial public offering last month and plans to execute a “public listing” after a review by regulators. It declined to provide further details.

The venture-capital firms that took stakes in Warby Parker have a lot riding on an IPO, and so does the rest of the direct-to-consumer industry. The big critique of these companies is that they haven't lived up to the hype of their investments and press attention.

Yes, they caused disruption, but most have struggled to maintain their early success. Few firms have gone public, and the ones that have, such as Casper Sleep, largely disappointed. But more are likely to hit the stock market in the coming months, especially with increases in special purpose acquisition companies, or SPACs, that make it easier to go public.

That’s why Warby Parker’s ability to grow through physical stores isn't just important to potential investors in its public offering. It could be seen as a proxy for all these young consumer brands. Can they really mature past the fad stage and push sales into the billions by dotting America with physical locations? With the cost of online advertising continuing to rise, using stores to acquire customers, while also pricey, is a choice more will likely make.

Warby Parker’s new slate of stores will have trained eye doctors, just like about 80 of its current locations. That, along with it becoming a covered provider on more vision insurance plans, may help boost its fledgling contacts business. The company, which jumped into that market in late 2019, declined to give specifics on how it has performed.

When it was founded in 2010, Warby Parker stood out by selling glasses online for about $100. The company sent frames to customers. They would try them on, pick one and provide their prescription to have their glasses made. The model quickly took off and ignited a direct-to-consumer frenzy spanning swimsuits to vitamins.

To unlock more growth, the company has been trying to remove the need for customers to transfer a prescription, but it’s difficult. Consumers often develop trusting relationships with their eye doctors, who then sell them glasses and contacts. That’s why Warby Parker is providing more eye exams in stores and eventually wants to offer them online. That could increase repeat purchases.

Using online exams will “make it easier, faster and cheaper for people to get new prescriptions,” said Dave Gilboa, a co-founder who also serves as co-CEO. ​​​“We continue to invest in telemedicine, which we think we’re in the top of the first inning.”

The same can’t be said for the overall business. In the direct-to-consumer world, Warby Parker is the old hand. And the next few months could go a long way in defining it and the digital brand era. The co-CEOs don’t seem worried, though. The company hasn’t seen competitors be able to match its pricing, product or customer service, they said.

“If we get those things right, then our financial metrics and business success will follow,” Gilboa said. “That should make investors happy over time.”