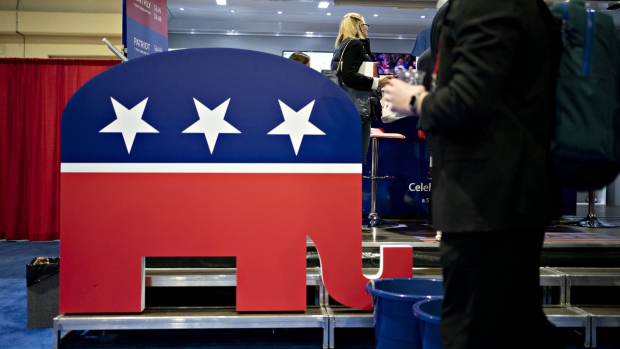 The Republican Party (GOP) elephant mascot sits on display in the exhibition hall during the Conservative Political Action Conference (CPAC) in National Harbor, Maryland, U.S., on Friday, Feb. 28, 2020. President Trump will address this years CPAC after seeking to close ranks within his administration about the threat posed by the coronavirus and how the U.S. government plans to stop its spread following mixed messages that rattled Wall Street. Photographer: Andrew Harrer/Bloomberg , Bloomberg

The cash surge included $158 million given in the fourth quarter, when the average donation was a little more than $37. First-time donors gave $209.3 million to campaigns in 2021, WinRed said, crediting early investments in online fundraising by GOP candidates for the surge.

ActBlue, the Democrats’ rival platform has not yet released its total for 2021. Both committees must report their federal fundraising activity to the Federal Election Commission by Jan. 31.

WinRed’s robust total tops the $523 million that donors gave through ActBlue in 2017, right after former President Donald Trump was elected and Democrats aimed to end the Republican majorities in the House and Senate.

The GOP support came as President Joe Biden and the Democratic Party have seen their poll numbers drop amid rising inflation, the ongoing pandemic and an inability to pass key parts of their legislative agenda, including economic recovery measures and voting rights, pointing to trouble in the upcoming legislative elections.

The generic congressional ballot, which asks which party a voter prefers, favors the GOP by 1%, according to the RealClearPolitics average. Democrats led by 5.3% as recently as July.

The House is narrowly divided, with Democrats holding 221 seats compared to 212 for Republicans and two seats vacant. The Senate is deadlocked at 50-50.

Historically, the president’s party loses seats in the midterms. Nearly two dozen Democrat lawmakers have announced that they won’t seek re-election this year and redistricting in a number of Republican-led states also favors a GOP majority in November.

Not all of the money went to federal candidates. Donors gave state and local candidates $80.7 million, and nonprofit advocacy organizations also use the platform to raise money.

Democrats have long enjoyed an advantage in online fundraising. ActBlue, which launched in 2004, has raised $9.5 billion since. WinRed, which won Trump’s backing as the GOP version, has raised $2.7 billion since it started operations in June 2019.