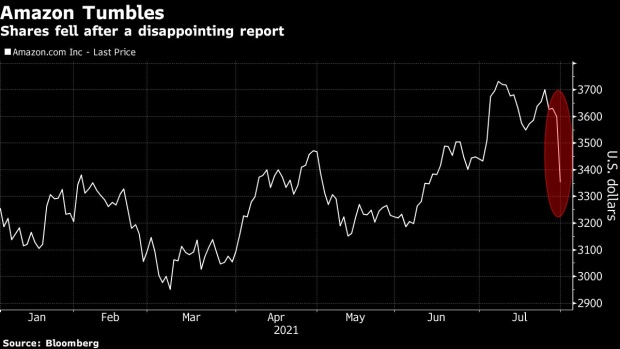 Amazon shares fell as much as 8.1%, their biggest one-day intraday drop since May 2020. That came after its revenue lagged forecasts for the first time since 2018, according to data compiled by Bloomberg, and its forecast fell short of the analyst consensus. The report fueled speculation that the growth of online retailing will slow as the economy reopens from the pandemic.

Morgan Stanley wrote that Amazon’s results showed a steeper deceleration in retail growth than had been expected. “We attribute this to re-opening headwinds (slowing growth in spend per Prime member) weighing on spend against difficult compares,” analysts led by Brian Nowak wrote.

Wayfair Inc. shed as much as 8.3%, dropping to its lowest since January in what was on track to be its eighth straight negative session. Baird analyst Colin Sebastian cut the price target on Wayfair, saying reports from Amazon, Pinterest, and Overstock suggest “that some of the Q2 choppiness in online spending may be continuing into Q3.” Wayfair is slated to report before the market opens on August 5.

Overstock.com Inc., which reported earlier this week, fell as much as 4.1% in what was on track to be its fourth straight negative session. MercadoLibre Inc. dropped as much as 5.3%, and Chewy Inc. was down as much as 2.7%.