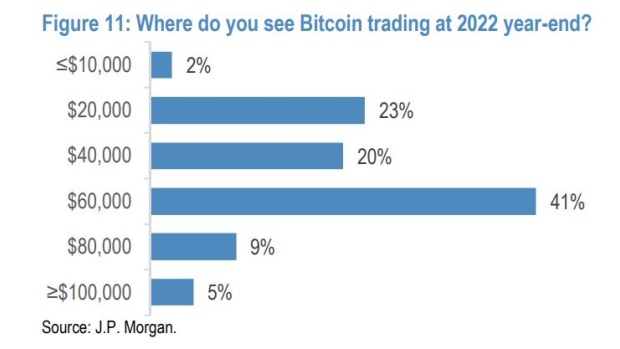 Stacks of bitcoins sit near green lights on a data cable terminal inside a communications room at an office in this arranged photograph in London, U.K., on Tuesday, Sept. 5, 2017. Bitcoin steadied after its biggest drop since June as investors and speculators reappraised the outlook for initial coin offerings. Photographer: Chris Ratcliffe/Bloomberg , Bloomberg

Only 5% of clients polled by JPMorgan Chase & Co. said they see the digital coin reaching $100,000 before the end of 2022. More than 40%, though, saw it above $60,000, where it was roughly two months ago before it commenced its latest stretch of declines.

“I’m not surprised by Bitcoin bearishness,” said Nikolaos Panigirtzoglou, a strategist at the bank and an author of the research note that included the survey. “Our Bitcoin-position indicator based on Bitcoin futures looks oversold.” He added that the coin’s fair value is between $35,000-$73,000, depending on what investors assume about its volatility ratio versus gold.

The largest digital asset by market value has dropped about 40% since reaching a high of almost $69,000 in November. Still, even amid the turbulence, many analysts have said they foresee it going to $100,000 in the new year. That may well happen -- the coin has an ability to shock disbelievers time and again, though market-watchers agree that the path to that threshold may be rougher with a more-hawkish Federal Reserve.

The latest stretch lower in crypto is happening as odds rise that policy makers could commence a series of rate hikes as soon as March -- and that’s just one of several steps they’re set to take in removing liquidity. In such an environment, speculative investments lose their luster. The Bloomberg Galaxy Crypto Index has lost roughly 13% to start the year, while Bitcoin has notched its worst start to a new year since its earliest days.