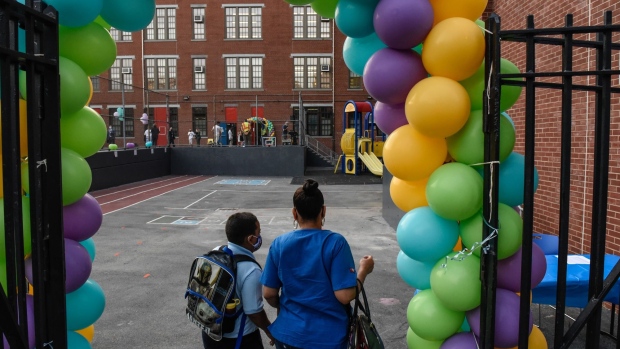 A student arrives on the first classes at a public school in the Bronx borough in New York, U.S., on Monday, Sept. 13, 2021. For the first time since the beginning of the Covid-19 pandemic, all of New York City’s public school students are expected to return to classes in person on Monday. Photographer: Stephanie Keith/Bloomberg , Bloomberg

(Bloomberg) -- About eight out of 10 schoolchildren expected to show up to New York City’s first day of public school on Monday came back to class, according to a preliminary count by the education department.

The 82.4% attendance rate may increase as hundreds of schools in the U.S.’s largest public school system haven’t yet reported their first-day enrollment, Mayor Bill de Blasio said on Tuesday. That compares to around 90% in 2019 and 83% in 2020, when many children attended schools remotely during the pandemic, he said.

“We understand there is a disruptive reality to all the changes we’ve been through. I see this as a very strong number,” de Blasio said during a briefing. “We have some ground to make up, I’m very confident we will.”

The full return to in-class instruction will test de Blasio’s decision to eliminate a virtual option for the nation’s largest district and his insistence that schools can keep infection rates low -- even with all 1 million children learning in person and the delta variant spreading among the unvaccinated. Since the start of the school year, about 1,700 schools in 38 U.S. states have closed because of Covid-19, according to the Burbio tracker, which follows school shutdowns.

Read: New York City Schools Reopen to a Mixture of Fear and Relief (3)

Schools chancellor Meisha Ross Porter said many students showed up for the first time to register for school, and the number will be rolling as attendance grows over the first few weeks.

“As soon as we get to the point where we have full attendance taken across the number, we’ll share those numbers,” she said at the briefing.

De Blasio and Porter also touted the increase in vaccinations among kids age 12 to 17, which have climbed to 68%. On the first day of school, de Blasio said mobile vaccination sites set up outside schools delivered around 1,300 shots.