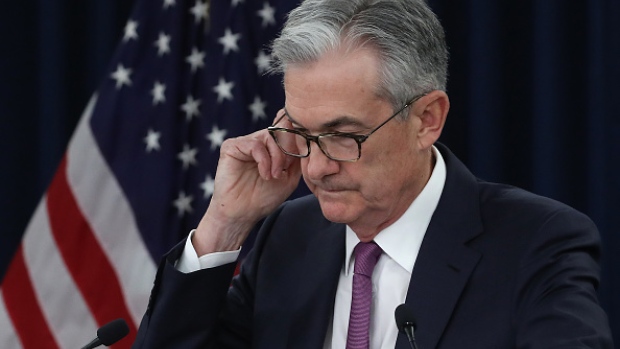 (Bloomberg Opinion) -- At the conclusion of Wednesday’s Federal Open Market Committee meeting, the Federal Reserve acknowledged what has been evident to market participants for months: The next policy move is not equally likely to be up or down. Instead, it is more likely to be down. More than that actually. The bar to an interest-rate cut at the next meeting at the end of July must be so low that it is virtually guaranteed. If the data continue to confirm that the economy is slowing to or even below trend, even more rate cuts will follow.

Seven of the 17 participants at this FOMC meeting anticipate 50 basis points of rate cuts this year. One anticipates a 25 basis points cut. One of those participants, Federal Reserve Bank of St. Louis President James Bullard, favored an immediate rate reduction now. Fed Chair Jerome Powell played down the appearance of a deep division among policy makers by noting that even those participants expecting a flat rate path agreed that “the case for additional accommodation has strengthened” since their May meeting. In short, the Fed is poised to cut rates, they just need another meeting to get there.

To be sure, the uncertainties around the trade outlook and the related impact on business investment could theoretically dissipate quickly should the U.S. and China find a way to resolve their differences. I don’t think such an agreement would necessarily prevent a rate cut. Even aside from the risk posed by trade, the Fed’s forecasts by themselves argue for easier policy. The core inflation forecast fell from 2.0% to 1.8%, the longer-run unemployment rate estimate declined from 4.3% to 4.2%, and the longer-run rate forecast dropped from 2.8% to 2.5%.

Altogether, the story is that Fed officials increasingly see current policy rates as fundamentally less accommodative than previously believed. Furthermore, the Fed’s rapidly changing assessment of the economy since December reinforces the view that the final rate hike of 2018 was a mistake. There should be a high willingness to reverse that mistake at the July FOMC meeting. There just wasn’t quite enough consensus to get it done at this meeting.

What incoming data would prevent a rate cut? A strong jobs report is an obvious contender, but I think it would have to be a mirror image of the May report in that the June number needs to be both strong and the previous months revised higher. In other words, the Fed would need to be convinced that the sharp slowdown in hiring activity did not really happen. A good June number alone won’t do that as it could be interpreted as the outlier, not the trend.

Also note that between now and July only one employment report will be released, on July 5. Two employment reports were released between the May and June meetings. In effect, the Fed set up market participants to expect a rate cut in a window with only one additional look at a key report. In my mind, that implies the data that rolls in the door in the next six weeks needs to be almost extraordinarily good or reveal substantial inflationary pressures to stay the Fed’s hand in July.

Beyond July, the Fed will need to see continued evidence that the pace of activity has slowed to justify further cuts. The magnitude of that slowdown does not have to be recessionary. The Fed’s objective is no longer about containing inflationary pressures. There has been no substantial inflation to contain. Now the objective is, according to the FOMC statement, “to sustain the expansion.” If the incoming data continue to support the story that growth is decelerating, the Fed will err on the side of more accommodative policy.

Overall, the Fed’s pivot is bullish for the economy. If the Fed wanted to make a soft-landing a reality, they needed to be willing to cut rates before the data turned decisively south. The Fed has now moved one step closer to such a move. By July, they will more than likely be all the way there.

To contact the author of this story: Tim Duy at duy@uoregon.edu