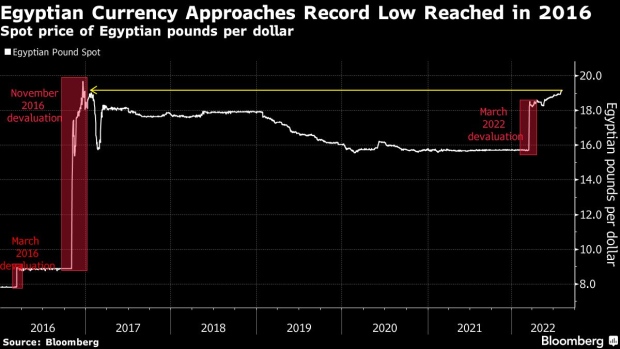 A currency that the world’s biggest banks say is too expensive likely leaves Egypt few options besides allowing it to weaken further.

A greater flexibility in the pound has emerged as an issue for Egypt as the government looks to clinch a new loan from the International Monetary Fund. In the view of Deutsche Bank AG and Goldman Sachs Group Inc., the currency is about 10% overvalued, as measured by its real effective exchange rate, while Citigroup Inc. has a lower estimate of 5%.

Urgency is building for the $400 billion economy despite a devaluation of more than 15% in March. The dollar’s rally since then has weighed on the currencies of its trading partners and other developing peers, while energy and food shocks from Russia’s invasion of Ukraine strained Egypt’s finances.

The pound needs to weaken about 23% to help the economy adjust and reduce Egypt’s funding gap, according to Bloomberg Economics.

Derivatives traders are also pricing in further declines, even after Egypt’s currency posted 11 weeks of losses in the offshore market, its worst streak in almost a decade. In the non-deliverable forwards market, the three-month contract was around 21 per dollar Wednesday, 9% weaker than the offshore spot rate.

“Policy makers may be concerned about the side effects of devaluation, such as rising inflation when it’s already in double-digits, and the risk of social unrest. Egypt may well end up weakening its currency, but by less than the economy needs.”

Egypt turned to the IMF for new assistance in March as it secured pledges of more than $22 billion in deposits and investments from Saudi Arabia, the United Arab Emirates and Qatar. In a reflection of a growing strain on Egypt’s finances, the central bank’s net international reserves fell to $33.14 billion in July, the lowest since June 2017.

Speculation that the IMF would demand for more flexibility in the pound as part of the conditions attached to a new package has pushed the currency closer toward its record low reached in 2016.

Still, the extent of the remaining overvaluation “should displease the IMF, which appears to have stricter lending terms across most illiquid markets,” Citigroup analysts including Lydia Rangapanaiken said in a report.

“Investors have persistently priced further devaluation,” given the decline in net foreign assets, they said.

It marks a reversal of fortune for the one-time darling of emerging-market investors.

In 2016, the government agreed to a $12 billion IMF program and devalued the currency, committing to measures that burnished its appeal for foreign investors. Drawn to Egypt’s high interest rates, a stable pound and its track record of market-friendly moves, foreigners had pumped billions of dollars into its debt market.

But price pressures have by now pushed the nation’s inflation-adjusted rates below zero, as central banks elsewhere tighten policy. The government said in May that foreign investors had pulled some $20 billion from the local debt market since the start of this year.

Egypt’s central bank surprised most forecasters in June by keeping its benchmark unchanged after its biggest hike in nearly a half-decade the month before.

The nation’s local bonds have lost 2.2% this month, making them the worst performer in emerging markets, according to Bloomberg indexes. Foreign demand hasn’t returned yet, with bond auction results still weak.

“A continuation of the tightening cycle would contribute to renewing investor interest in local markets and could ease some of the exchange-rate pressures,” Deutsche Bank Research’s Anna Friedmann and Christian Wietoska said in a report. “We expect further currency weakness, but expect to see more gradual depreciation instead of another sharp devaluation.”