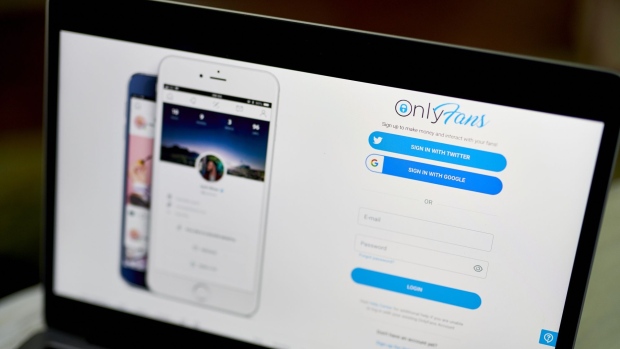 The OnlyFans site in June 2021 , Bloomberg

Gan said it was Stokely’s decision to step aside and name her as his successor. The two have worked together closely over the past year and a half, grappling with the explosive growth of the company and the increased scrutiny their success has invited.

Gan joined OnlyFans in 2020 as head of communications and marketing after working for Red Bull, Quest Nutrition and a Los Angeles-based cannabis café. Stokely will become an adviser to the London-based company, which he has run since it started up in 2016, according to a statement Tuesday.

Gan must now chart a course for the future of a company that has millions of users and creators but has wrestled with its reputation as a purveyor of pornography and sex work. She said the closely held company will increase its investment in its free streaming app, OFTV, and introduce new tools for creators.

“We’ve worked side-by-side sharing our passion about the creator economy,” Gan said in an interview. “Our priority is to continue being committed to being the safest social media platform in the world.”

Stokely founded OnlyFans after a couple of previous business ventures in online pornography. The company offered a way for online creators, including sex workers, to charge their fans for access to exclusive photos and videos. Stokely sold a majority stake to internet entrepreneur Leonid Radvinsky.

The site gained a following among sex workers who used OnlyFans as a safe and controlled way to send illicit photos and videos. Site usage jumped during the Covid-19 pandemic as everyone from strippers and social media influencers to mainstream celebrities signed on. Cardi B used OnlyFans to promote a new song, while actress Bella Thorne shared photos of herself.

The company became a darling of the so-called creator economy and explored selling a stake that would value it at well more than $1 billion.

Yet many investors balked at investing in a company so closely associated with pornography. OnlyFans announced this year that it would no longer allow sexual content, citing difficulty doing business with banks and payment processors. It reversed the policy after less than a week and outcry from many of its top creators.

Gan declined to comment on whether the company is seeking to raise money,  remains committed to sexual content or any role Radvinsky may have played in the leadership change. She also declined to say whether the brief policy changes over the summer affected business.

The company takes a 20% cut of sales when its users sell subscriptions to their fans. Creators also charge for private messages in chats. OnlyFans generated about $1.2 billion in sales last year and was on track for about $2.5 billion this year, according to Axios.