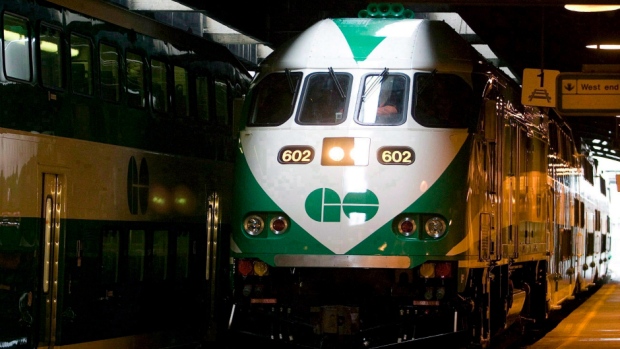 CN Rail installed partially-used parts on an Ontario transit project but charged taxpayers for new parts, according to a scathing new document by the province’s auditor general.

In her two-volume, 1,063-page report that blasts the Ontario government of poor oversight and spending snafus, Bonnie Lysyk drew specific attention to the way CN and CP Rail invoice Metrolinx.

She notes Metrolinx is “highly dependent” on CN and CP to maintain and improve tracks, putting the railway companies in a strong negotiating position.

“We have concerns that Metrolinx has not managed its relationship with CN and CP in a way that is in the best financial interests of Ontarians,” Lysyk says.

Her report reveals the province’s transit agency recently confronted CN about its use of recycled parts on a section of track. According to Lysyk’s report, the railway “admitted this had in fact taken place — but, CN said, only to a very limited extent.”

The railroad company estimated it overcharged Metrolinx by just $25,000 and added it wasn’t aware of any other instances where it charged the agency full price for used parts.

“However, there were other similar concerns brought forward in the past,” writes Lysyk.

The auditor general also found CN Rail charges Metrolinx up to 130 per cent more for labour on railway tracks than a competitor.

"When it pays for new parts it does not check to ensure that the parts are new," said Lysyk.

“CN is dedicated to transparency, fairness and accountability in all its contracts and projects with Metrolinx and Go Transit. Projects we have partnered on utilize rigorous construction management processes covering project specifications and budgets to deliver quality work with strict oversight,”  CN spokesperson Patrick Waldron told BNN via email.

“CP applies current industry standards and best practices in its commercial communications and transactions with all partners and customers,” CP spokesperson Martin Cej told BNN in an email.

“CP’s estimates for a project of almost $2 million can be as short as a two-page letter. The estimates specify only how much design will cost, how much construction will cost, and the total cost — with no further breakdown provided.”

But for Lysyk, the onus is largely on Metrolinx to fix its relationship with Canada’s two largest railways.

Among several recommendations, the auditor general says Metrolinx should inspect the railways’ work and renegotiate its agreements with CN and CP to ensure proper invoicing.

In her annual report, Lysyk also says the pavement on some Ontario roads and highways that is supposed to last 10 to 15 years starts to crack after just two or three, significantly increasing the Ministry of Transportation's repair costs.

"For a sample of five highway jobs...we calculated that the ministry paid $23 million for repairs after one one-to-three years, on top of the $143 million to initially pave these highways that should have lasted 15 years," Lysyk reports.

She said the ministry has known about problems with premature cracking since 2000, but still agreed to a request from asphalt producers and cement suppliers to delay plans to start tests that would identify asphalt that is likely to start breaking up before it should.

The auditor found contractors were "tampering with asphalt samples" so they could obtain part of the $8.8 million the ministry paid in bonuses for them to include the quality asphalt specified in the contract, which they "are always expected to do anyway."

The province spent about $6.1 billion on 2,100 highway projects in the past five years, with $1.4 billion of that going to road paving, but the auditor found the Ministry of Transportation allowed the Ontario Road Builders' Association "to influence its internal operational policies to benefit contractors rather than the ministry."

Contractors, not the province, hire the engineers who certify the quality of construction projects, and the ministry allows contractors who received unsatisfactory ratings to win new contracts for "significant amounts of work," even though they were supposed to be prevented from bidding.

Lysyk said Metrolinx does not hold contractors and design consultants accountable for public transit projects that are late or inadequate, and like the ministry of transportation, sometimes awards new work to contractors that performed poorly in the past.

"The lack of a process to hold construction contractors accountable contributes to projects being completed late, inconveniences commuters and adds extra costs for Metrolinx and taxpayers," said Lysyk. "Metrolinx should introduce penalties such as late fines."

Metrolinx is now responsible for $1 in every $7 dollars of government capital spending, but the auditor found the transit agency often doesn't know if it's getting what it pays for.

--With files from Keith Leslie, The Canadian Press