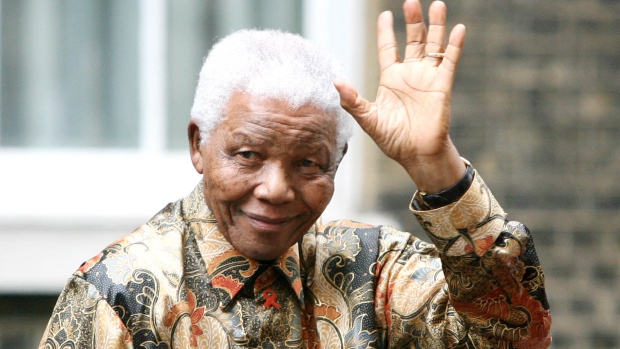 It’s one of the more unusual deals in the art world. After more than a decade, an Alberta businessman has finally found a buyer for his prized collection of gold castings of Nelson Mandela’s hand. The final price? Ten million dollars -- in bitcoin.

Attempts by Malcolm Duncan, formerly of South Africa, to sell the hands back in 2007 were scuppered by controversy over provenance and a possible missing charitable donation. This time he’s had better luck, albeit with an unusual buyer.

Little information is available about Arbitrade, an Ontario-based cryptocurrency company, something Chairman Len Schutzman says is about to change.

The company is “weeks away” from doing an initial coin offering and is building a facility in Waterloo, Ontario, to mine its own cryptocurrencies and plans to trade others. Its key selling point, he says, is that it will back all its virtual coins with some percentage of physical metal -- including gold.

'Cryptojacking' is here and anyone could be vulnerable

It's the newest cybersecurity threat: cryptojacking. Security strategist at Carbon Black, Rick McElroy walks BNN's Catherine Murray through how this new trend works and suggests the steps you can take to protect yourself.

Nelson Mandela’s solid gold hand would seem to fit the bill, although as a general rule Schutzman says he’ll seek to acquire gold bars or coins rather than art. Weighing 20 pounds, the value of the gold is a fraction of the artifacts’ purchase price. Their real value is one of publicity, as a means of educating millennials about Mandela -- and Arbitrade -- through a global “Golden Hands of Nelson Mandela” tour the company plans to launch, he said.

The hands aren’t the first examples of “Mandela Art” to prove tricky to buyers and sellers. After the anti-apartheid revolutionary was released from prison, thousands of pieces of art bearing his name began flooding the market. Various scandals, including allegations of forgery, put a stop to the deluge.

Under Mandela’s own orders, many works were destroyed and the subject remains a touchy one in South Africa to this day. Duncan believes he owns the only four surviving casts of Mandela’s hand, palm and fist, tucked into bespoke imbuia wood boxes. “He cut his thumb quite badly on Robben Island, his right thumb, and you can see it,” Duncan said.

Photographs show Mandela sitting for the castings, which were made by a defunct division of Harmony Gold Mining Co. in 2002. As a condition of being allowed to buy the artifacts, Duncan says he paid double the 1.8 million-rand purchase price with the understanding Harmony would give half to Mandela’s charities. Whether that happened remains unclear.

Harmony has “supplied Mr. Duncan with the necessary paperwork verifying the provenance as requested by his attorneys,” Harmony Investor Relations Manager Lauren Fourie said by email, declining to comment when asked about the status of the donation.

So far, Duncan has been paid a bitcoin deposit that has been converted to US$50,000. The rest is due to be delivered in quarterly installments of at least US$2 million per extremity, starting April 30.

“They take possession when I have the dollar amount in the bank,” says Duncan, who has insisted Arbitrade guarantee the value in U.S. dollars, and handle the conversion. “At two-and-a-quarter million at a time, they take one hand at a time.”

--With assistance from Paul Burkhardt