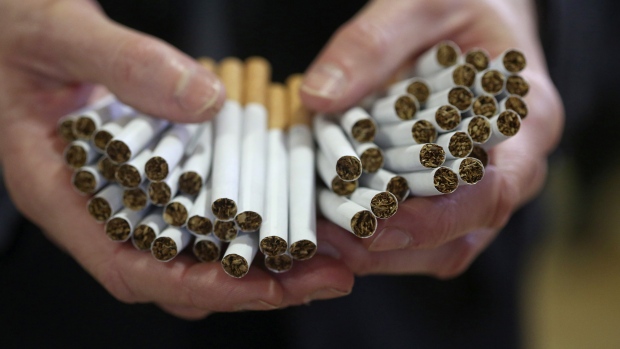 An employee holds cigarettes for a photograph in the U.K. , Chris Ratcliffe/Bloomberg

TORONTO - An Ontario court again extended an order suspending legal proceedings against three major tobacco companies on Tuesday as they continue work towards a settlement with their creditors.

McEwen said he accepted the position of the companies that they were engaging in good faith negotiations with their creditors, and noted none of the other parties opposed the extension.

The stay has already been extended several times, most recently in February, and was due to expire Wednesday.

The order to put legal proceedings against the three tobacco giants on hold was first granted more than a year ago after the companies lost an appeal in a landmark class-action lawsuit in Quebec.

The stay aims to maintain the status quo while the companies negotiate a global settlement with the class-action members and several other creditors - including a number of provincial governments seeking to recover health-care costs related to smoking.

Lawyers representing the Quebec plaintiffs said earlier this year they believed a settlement could be reached by Wednesday's deadline, stressing the urgent need for a resolution given that class-action members continue to die from smoking-related health issues.

The province's highest court last year upheld a ruling that ordered the companies to pay more than $15 billion in damages to Quebec smokers who either fell ill or were addicted.

Rob Cunningham, who represents the Canadian Cancer Society, said after Tuesday's hearing that provincial governments must make public health measures the priority in the negotiations.

“The tobacco industry should not be able to carry on business as usual.”

Two organizations, Physicians for a Smoke-Free Canada and the Quebec Coalition for Tobacco Control, said the provinces - particularly Ontario and Quebec, whose claims are the largest - should push for a court-supervised strategy to gradually reduce the demand and supply of tobacco.

Flory Doucas, co-director of the Quebec Coalition for Tobacco Control, said in a statement that since the creditor protection process is meant to keep companies in business, it's clear governments will not be awarded the amounts they're seeking.

“It is therefore not only ethical but financially sound for governments to make this about concrete means to reduce the number of people who are addicted to nicotine and who smoke, as this would also generate far greater savings than any realistic monetary settlement,” Doucas said.

The two groups commissioned an economic study, conducted by the health-care consulting firm H. Krueger and Associates Inc, that found Quebec would save $22.2 billion and Ontario $26.1 billion if smoking prevalence was reduced to less than five per cent by 2035.

That reduction would line up with the federal government's established target for tobacco control.