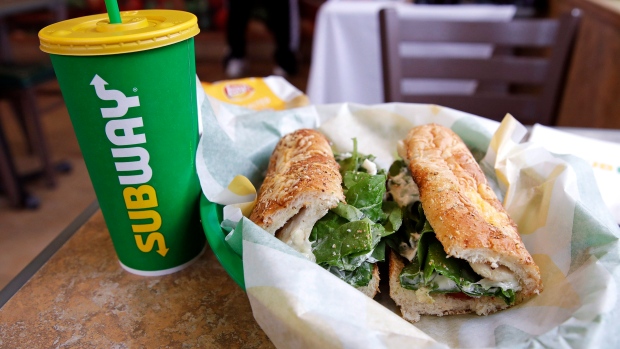 The Subway logo is seen on on a soft drink cup next to a sandwich at a restaurant in Londonderry, N.H., Feb. 23, 2018. AP Photo/Charles Krupa

An Ontario court has dismissed a lawsuit filed by Subway against the CBC over a report on the content of its chicken sandwiches, but says legal action against the lab that tested the products can proceed.

Subway sued both the CBC and Trent University, which runs the lab, for defamation over a February 2017 broadcast of "Marketplace" and the accompanying online publications about the chain's Canadian chicken products.

It claimed the report — which found only 50 per cent chicken DNA in Subway's chicken sandwiches with as much soy  was based on a faulty investigation and caused the company significant business losses.

U.S.-based Subway IP, along with Subway Franchise Systems of Canada and Doctor's Associates in the United States, sought US$210 million in damages.

The CBC and Trent, meanwhile, asked the court to throw out the suit before it went to trial under so-called anti-SLAPP legislation, which aims to protect free speech on matters of public interest.

In a ruling issued last week, Ontario Superior Court Justice Edward Morgan found that dismissing the suit against the broadcaster would fulfil the law's purposes in promoting participation in debates on matters of public interest.

"Under the circumstances, I find that these public purposes are fulfilled by dismissing the action as against CBC. They outweigh any potential impact that this may have on the private interest of Subway," he wrote.

In order to get a lawsuit tossed out under anti-SLAPP legislation, the party being sued must first prove that the issues it raised touch on a matter of public interest. If that test is met, the onus then shifts to the plaintiffs to establish that their claim has merit and that the defendants have no valid defence.

In the CBC's case, Morgan said it was clear the program dealt with a matter of public interest.

"The 'Marketplace' report raised a quintessential consumer protection issue. There are few things in society of more acute interest to the public than what they eat," the judge wrote.

Morgan also found Subway's claim had substantial merit, noting the court was not required to weigh the entire case at this stage but simply to determine if the company could have a chance of winning if the lawsuit proceeded.

"While I make no definitive finding, there is considerable evidence that suggests the false and harmful nature of the information conveyed to the public in the 'Marketplace' report," the judge wrote.

"In supporting its claim, Subway has done a significant amount of work in obtaining expert evidence, in having the chicken products in question tested and retested by independent laboratories, and in demonstrating the wide circulation of the CBC's broadcast and publication."

However, the judge found Subway had not proven that CBC did not have a valid defence. The broadcaster had advanced a defence of reasonable communication, arguing it had taken reasonable steps to validate the accuracy of its reporting.

"On the state of the record, I find it hard to conceive of a reasonable jury finding that CBC has no valid defence of responsible communication," Morgan wrote.

"CBC made inquiries of Trent staff — an already independent source — and hired its own expert to investigate and advise on Trent's methodology and results. These efforts to contact credible sources go a great way toward establishing the responsibility criterion that is fundamental to CBC's defence," he said.

"CBC sought Subway's input into the article, and to the extent that it could given Subway's limited willingness to go on the record, it incorporated Subway's position into the 'Marketplace' report and the follow-up blog. CBC therefore went substantially down the road of accommodating Subway's concerns by providing the context in which the impugned statements about Subway's chicken products were made."

Trent's attempt to have the lawsuit thrown out under anti-SLAPP legislation was unsuccessful, however.

The university is being sued for negligence as well as defamation, and only applied to have the negligence suit dismissed, which the judge called an "unusual legal strategy."

While the public has an interest in seeing that labs, like doctors and other professionals, are held to an appropriate standard of care, Trent failed to convince the court that the negligence claim it faces "arises from an expression made by the person that relates to a matter of public interest" as required in the anti-SLAPP context, he wrote.