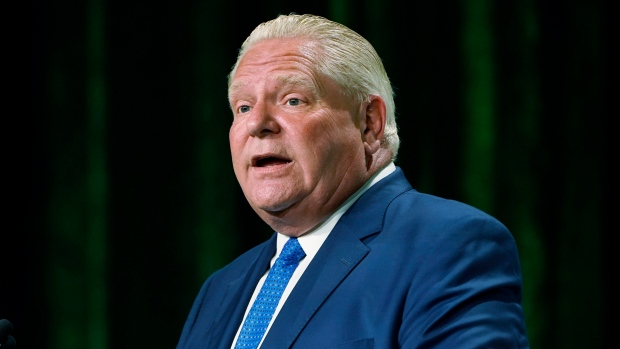 Ontario Premier Doug Ford speaks to the Association of Municipalities Ontario conference on August 15, 2022 in Ottawa. (THE CANADIAN PRESS/Adrian Wyld)

Ontario’s government is creating an economic advisory group with representatives from Stellantis NV and three indigenous groups to try to advance billions of dollars of investment in clean energy and infrastructure projects.

The governments of Canada and Ontario have provided financial support to a raft of electric vehicle initiatives to try to save auto-sector jobs as the industry transitions away from fossil fuels. That includes money for Stellantis to assemble electric vehicles in Windsor, Ont., and to LG Energy Solution and Stellantis to build an EV battery plant nearby.

Billions of dollars of investment will be needed, including spending on highways and energy infrastructure. The new group is meant to go beyond the government’s legal duty to consult with First Nations and ensure that indigenous people secure jobs and economic prosperity from any development near their communities, Greg Rickford, Ontario’s Minister of Indigenous Affairs, said in an interview.

The group was formed after indigenous leaders told the provincial government they wanted to be part of the opportunity created by the Stellantis plant, Rickford said. Currently, it doesn’t include corporate representatives from any other companies, but it lays the foundation for broader involvement, he said.

“Our government has demonstrated a capacity to do these large-scale projects differently,” he said.

Asked if the indigenous members of the group would have veto power, should they object to a project, Rickford said he would not speculate but, so far, discussions have all been positive.

“We are going to stand shoulder-to-shoulder with our First Nations partners to advance critical infrastructure projects and ensure everyone benefits from the opportunities that Ontario holds,” Premier Doug Ford said in a statement.

Windsor is in the southwest of Canada’s largest province, across the border from Detroit.