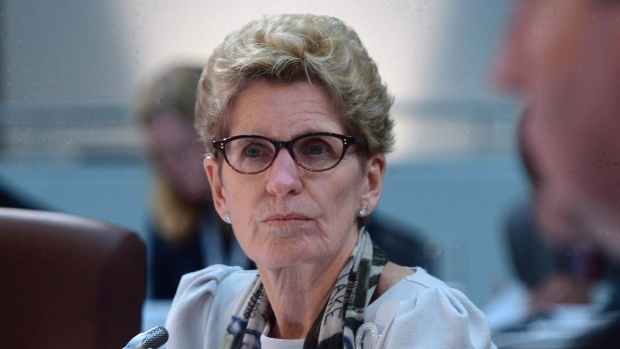 TORONTO -- Reducing the Greenbelt lands is not one of the options Ontario's Liberal government is considering as it tackles housing shortage in the province, Premier Kathleen Wynne said Wednesday.

The government, she said, is actually committed to expanding the Greenbelt, which is about 800,000 hectares of protected land that borders the Greater Golden Horseshoe area surrounding Lake Ontario.

"The Greenbelt is a hugely important swath of land that is like the lungs of this highly populated part of the province, so that's not something that we're looking at," said Wynne. "But we recognize that housing affordability is a huge, huge issue."

Finance Minister Charles Sousa has said he plans to include measures in the spring budget to address the red-hot housing market in the Greater Toronto and Hamilton Area, while taking into account different circumstances in the rest of the province.

The average price of a detached home in Toronto broke the $1.5-million mark for the first time last month.

The province already doubled the rebate on its land transfer tax for first-time homebuyers to $4,000 and raised the same tax on homes that sell for more than $2 million. But Wynne said her government is looking at more ways to make it more affordable for people to get into the housing market.

Sousa unsuccessfully urged Finance Minister Bill Morneau to include in his budget changes to the taxation of capital gains on the sale of homes that are not classified as a primary residence, as a way to address speculative investors flipping homes.

Speculative investing in the real estate market -- buying a home in the hope of turning a profit rather than to live in -- is believed to be one of the culprits behind the soaring house prices.

Ontario's budget is expected to be unveiled in the coming weeks.

The proposal also includes establishing Greenbelt-level protections for wetlands, woodlands and rivers beyond the Greenbelt.