The stage is set for early-pandemic housing trends to re-emerge rather than market normalization: STOREYS

It would come as no surprise to homebuyers that Canada has a structural housing deficit, but according to a new report from Scotiabank, that shortfall is particularly bad in three provinces: Ontario, Alberta and Manitoba.

“The challenge in Ontario is formidable given the numbers involved,” wrote Jean-Francois Perrault, senior vice president and chief economist at Scotiabank Economics, in a report on Wednesday.

His analysis examined data from 2020, which are the latest available figures.

“For Ontario to have the same level of homes per capita as the average in other provinces, over 650,000 additional housing units would be required," Perrault wrote.

He added that Alberta would need an additional 138,000 homes and Manitoba would require roughly 23,000 units to meet the national average.

The domestic housing supply, adjusted for its population, is also the lowest in the G7, according to Scotiabank.

Canadian homebuyers are no stranger to red-hot housing markets, a trend that was exacerbated by record-low interest rates during the pandemic.

A number of major urban housing markets, including Toronto and Vancouver, saw record sales activity and prices in 2021.

When compared to international peers, Perrault said it would take an additional 1.2 million homes to be built in Ontario for the province to reach the dwellings-to-population average of the G7, excluding Canada. All provinces except Newfoundland and Labrador came in below the G7 average.

Perrault noted, however, the numbers should be used to gauge the extent of the problem, rather than taken in absolute terms.

He said housing construction, as measured by housing starts, has been running at above pre-pandemic levels, but it’s unlikely to significantly move the needle on reducing the housing deficit, especially given the strong level of immigration expected in the coming years.

“As we look to the future, we remain of the view that the chronic shortage of housing relative to the population’s needs will put upward pressure on prices and reduce affordability,” Perrault said.

“This is not to say prices will increase every month,” he added, “but our view is that prices will generally be on the rise until a better balance between needs and availability is found.” 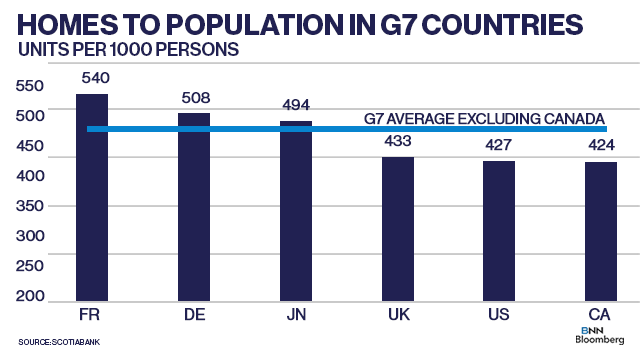