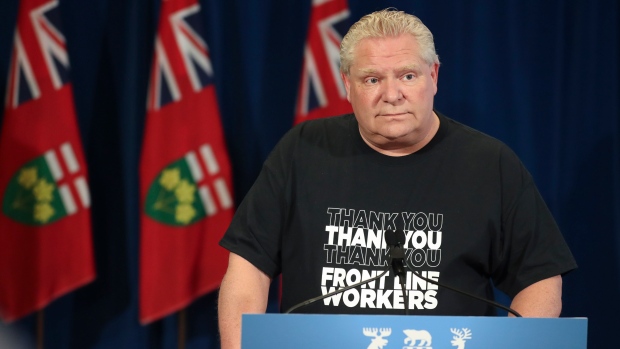 Ontario Premier Doug Ford listens to a question during a daily COVID-19 press conference at Queen's Park in Toronto on Saturday, May 9, 2020. The Canadian Press/Richard Lautens

Ontario Premier Doug Ford hinted that he may be keen to take on Canada’s top job in the future.

“Not yet,” Ford said at a briefing on Saturday after a reporter mistakenly referred to him as ‘prime minister’ during a Q&A session. He reiterated, with a smile: “You called me prime minister and I just said not yet.”

Canada doesn’t directly elect its prime minister. The leader of the federal political party that wins a general election gets the job.

Ford, who is less than two years into his term as Ontario’s leader, chose not to run for the leadership of the federal Conservative party when the role came open in December. Conservative leader Andrew Scheer stepped down amid mounting criticism of his performance in last fall’s election, when Justin Trudeau’s Liberals won with a minority government.

The party will choose a replacement for Scheer by a postal ballot set to take place in August. The candidates include:

• Peter MacKay, who was Minister of Foreign Affairs, Minister of Defense and Minister of Justice and Attorney General while Stephen Harper was Prime Minister

• Erin O’ Toole, who was Minister of Veteran Affairs during Harper’s leadership and is currently a Member of Parliament