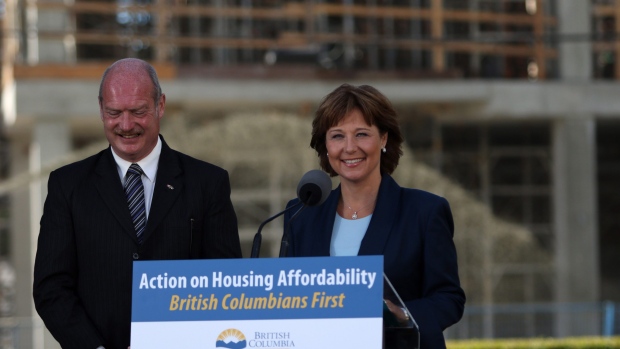 Premier Christy Clark and Finance Minister Michael de Jong, discuss amendments regarding housing issues in Greater Vancouver from the South lawn during a press conference at the Legislature in Victoria, B.C., Monday, July 25, 2016. , The Canadian Press

TORONTO -- One of Bay Street’s most outspoken economists has a warning for Ontario: it’s time to take a “long look” at following British Columbia’s lead on taxing foreign homebuyers.

“Business as usual is not going to cut it,” Porter wrote in a report to clients.  “Given that single-detached prices in the Greater Toronto area have jumped almost 20 per cent y/y, the Ontario government should take a long look at a similar move.”

“I’m looking forward to finding some solutions here,” Sousa told reporters.  “And I’ll be looking very closely at what British Columbia is doing.”

The intervention might need to extend even further eastward, according to Laurentian Bank Assistant Chief Economist Sebastien Lavoie.

“Given the regional distortions that the B.C. government is creating nationwide, I think it forces not only Ontario – but perhaps also Quebec – to follow up with similar measures to curb foreign money in the residential housing market,” Lavoie told BNN in an interview.

He added that a 10 per cent tax on foreign buyers might suffice for Toronto, and what’s most important now is to act quickly or else foreign buyers will look at a map of Canada to find whichever jurisdiction offers the fewest disincentives.

Meanwhile, some industry analysts are warning the tax intended to calm soaring real estate prices in Vancouver may be difficult to enforce because the foreign homebuyers it's aimed at may be able to get around it.

Foreign nationals could avoid the tax, which would take effect on Aug. 2, by purchasing properties through locals -- something that is already suspected to be common practice.

"I would be very surprised to see a lot of people buying houses as foreign individuals or foreign corporations," said Thomas Davidoff, a professor at the Sauder School of Business at the University of British Columbia.

"The question is, will buyers be able to successfully ... hide their identity by having a local permanent resident, a local corporation or a local family member who is a citizen through which they can funnel cash?"

Josh Gordon, an assistant professor at Simon Fraser University who has studied the issue, said it's common for money made overseas to flow into Vancouver's real estate market through local residents -- for example, a foreign national purchasing a home through a spouse or a child attending a Canadian university.

"Canadian permanent residents can buy properties as proxy buyers and they won't be subject to this tax, because they won't be considered foreign buyers," said Gordon.

Rather than charging a tax to foreign nationals, Davidoff said he would have preferred to see a policy that provides tax breaks to homebuyers who can demonstrate they're paying local income taxes.

"Why drag nationality in when the real question is, 'Are you a local worker?"' he said.

A number of other jurisdictions have imposed rules restricting foreign investment in their real estate markets, including Hong Kong, Singapore and Australia.

In a report published earlier this year, CIBC economist Benjamin Tal said it was too soon to say whether Australia's rules -- which were implemented in last summer and restrict foreigners to newly built houses and apartments -- are having the desired impact.

"But there are some early signs from Australia showing that it's working," said Tal, noting that the share of foreign nationals in new housing demand has fallen.

"But in terms of achieving affordability, substantially reducing prices, generally speaking these types of surtaxes don't get you there," he said.

Complicating matters is the fact that it's hard to assess whether any particular price movement was the result of the tax policy or some other factor, said Davidoff.

"It's very hard to hold all else constant in a major city," he said.

Regardless of uncertainty about the effectiveness of taxation, Vancouver realtors decried the new tax on foreign buyers as “needlessly” injecting uncertainty into the housing market – and urged the province to exempt pending home sales from the new tax.

“Government has had a long time to take action on the affordability issue,” said Real Estate Board of Greater Vancouver President Dan Morrison in a statement, “yet they decide to bring this new tax in over a long weekend, with no notice, and no time to prepare.”