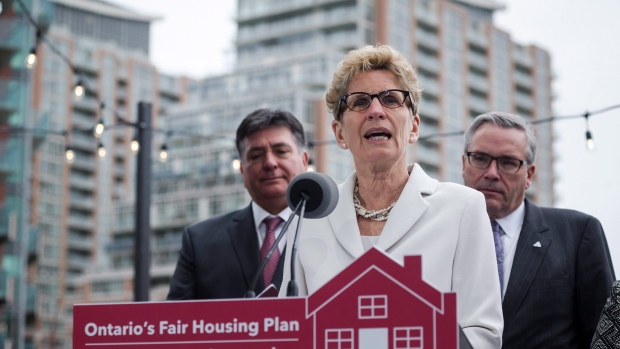 Premier Kathleen Wynne announced Thursday that a non-resident speculation tax will be imposed on buyers in the Greater Golden Horseshoe area -- from the Niagara region to Peterborough, Ont.-- who are not citizens, permanent residents or Canadian corporations. Once legislation passes, the tax would be effective retroactively to April 21.

The tax is not about targeting immigrants, Wynne said, and a rebate would be available to people who subsequently get citizenship or permanent resident status, as well as foreign nationals working in Ontario and international students.

Do you trust the Ontario government can avoid unintended consequences in its housing intervention?

"The non-resident speculation tax has nothing to do with new Canadians and people who want to make Ontario their home," she said. "With this tax, we are targeting people who aren't looking for a place to raise a family -- they're looking only for a quick profit or a safe place to park their money."

The average price of detached houses in the Greater Toronto Area rose to $1.21 million last month, up 33.4 per cent from a year ago.

Skyrocketing demand and rising cost of housing is the "unwanted consequence" of a growing economy, but the province's new measures will make the process of finding a place to live a little easier, a little less frantic and a lot fairer, Wynne said.

The province will also expand rent control, which currently only applies to units built before November 1991, after tenants in newer units complained of dramatic spikes in rent. New rules would see all private rental units fall under annual rent increase guidelines. Those have averaged two per cent in the last 10 years and this year it is 1.5 per cent.

Toronto Mayor John Tory has been calling for a tax on vacant homes, and Wynne says Ontario will give Toronto and other interested municipalities the power to impose such a tax to encourage owners to sell or rent such spaces.

"My goal as Mayor is to ensure housing is affordable in Toronto for all age groups and for all income levels," Tory said in a statement Thursday. "I am pleased that the government will activate surplus provincial land like the West Don Lands to create new affordable housing, something I have been urging the Premier to do for some time. I'm also gratified that the provincial government will allow the City to move forward with a vacant homes tax, subject to the results of our examination, and other measures to curtail speculation and add new supply into the marketplace right away."

Rules for real estate agents will also be reviewed, in particular practices such as double ending, where the agent represents both the buyer and the seller.

Ontario will also establish a program to identify provincially owned surplus lands for affordable and rental housing, with an eye to using a few specific sites such as the West Don Lands in Toronto for pilot projects.