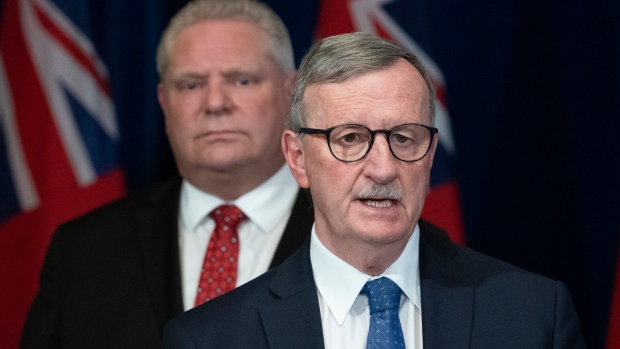 TORONTO -- Ontario's top medical official is recommending that all bars and restaurants close, with the exception of those that do take-out and delivery.

Dr. David Williams is also recommending that all private schools and daycares also close, along with churches and other places of worship.

He says people should not gather in groups larger than 50, in line with a federal recommendation.

The province announced earlier Monday that it is delaying the release of its full budget as it prepares to weather economic challenges of the COVID-19 pandemic.

Finance Minister Rod Phillips will deliver a one-year economic outlook on March 25, which will detail the fiscal resources that will be available for sectors such as health care and municipalities.

"It's important that I introduce a financial plan for the province that is as current as possible given the dynamic situation," he said.

Phillips said the full budget would be released as late as the fall. The province last week announced a $100-million COVID-19 contingency fund.

Ontario reported 32 new COVID-19 cases Monday, bringing the total in the province to 177.

The new cases are across the province, including in Hamilton, Ottawa and Sudbury, but the majority are in the Greater Toronto Area.

New patients are all self-isolating, but other information -- including their ages and how they became infected -- is sparse.

Ontario's chief medical officer of health, Dr. David Williams, chalked that up to new lab testing sites that have opened up to accommodate increased demand being unable so far to quickly enter that supplementary information.