Canada is not distributing vaccines like a G7 country: Ontario Chamber of Commerce

In a Hail Mary attempt to control a third wave of COVID-19, Ontario unveiled its strictest measures yet to restrict the movement of people, setting up checkpoints with neighboring Quebec and Manitoba for the first time in the pandemic.

The government of Premier Doug Ford said it will extend an emergency stay-at-home order to six weeks from four. The province is forcing non-essential construction sites to shut down and closing recreational facilities including golf courses, playgrounds and soccer fields. Essential stores such as supermarkets and pharmacies will have to operate at 25 per cent of usual capacity.

“My friends, we’re losing the battle between the variants and vaccines,” Ford said at a news conference Friday afternoon. “The reality is, there are few options left.” Schools, restaurants, personal care services and many retailers were already closed.

What’s really needed are more vaccines. If the province could triple its daily rate of inoculations to about 300,000 a day, it would significantly improve the chances of getting the virus under control, health officials said Friday, comments Ford echoed. “Until we have more vaccines, we need stricter measures.” 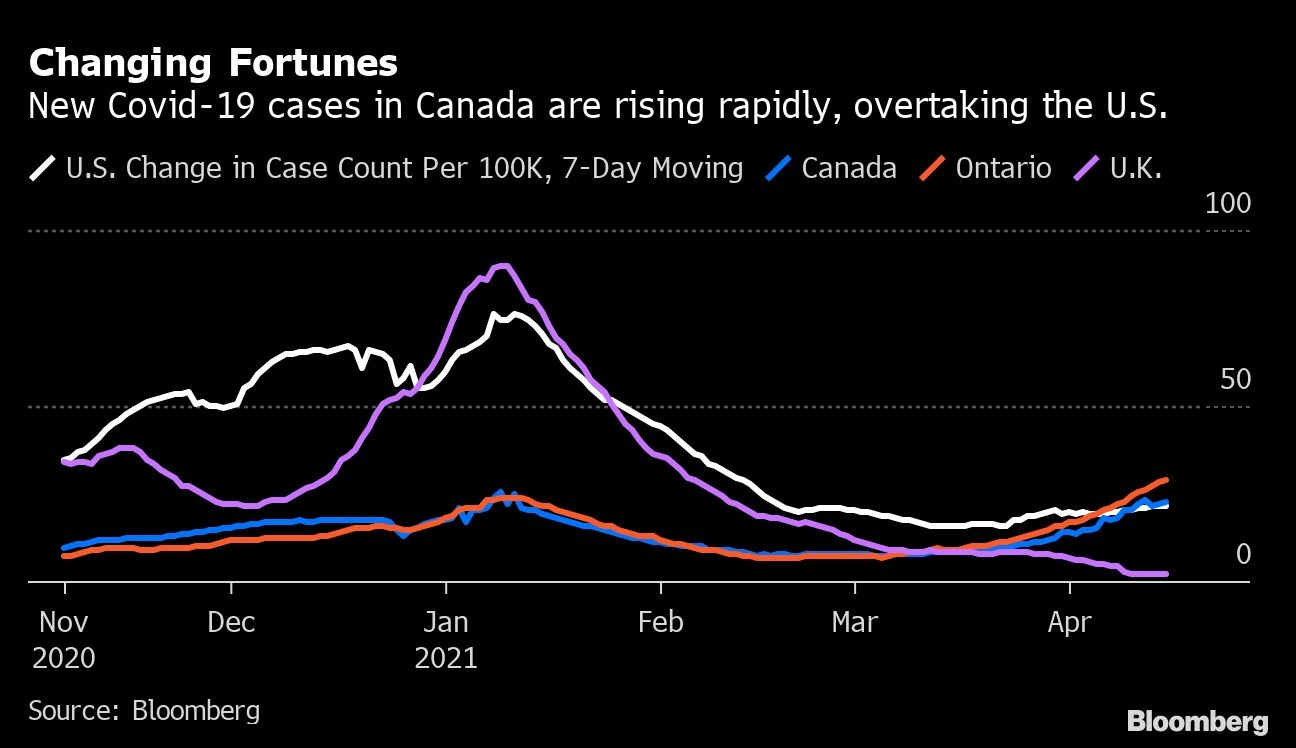 The province is running out of new steps to take and is imploring residents to take restrictions seriously.

Ontario reported 4,812 new cases in 24 hours, more than half of Canada’s total and a record for the region that’s home to nearly 40 per cent of its residents. This week, Canada passed the U.S. for the first time in the number of new COVID-19 cases per capita.

“The biggest problem we now face may be that we’re just too tired to notice,” Adalsteinn Brown, a doctor who is co-chair of the Ontario COVID-19 Science Advisory Table, said in a news briefing earlier Friday. Daily cases will exceed 15,000 a day in June without greater efforts to slow the spread, the advisory group said.

Ontario needs to be “laser-focused” on vaccinating people in hardest-hit areas and making sure essential workplaces are safe, said Brown. Even with heightened vigilance, the province’s intensive care units will have more than 1,000 virus patients in the next few weeks, based on current cases, he said.

About 22 per cent of Canadians have received at least one dose of a COVID-19 vaccine, compared with 38 per cent in the U.S. and 49 per cent in the U.K., according to the Bloomberg Vaccine Tracker. Securing enough supply has been a running problem. This week, some vaccination clinics in Toronto had to shut down because they’re out of doses.

On Friday, Moderna Inc. informed Justin Trudeau’s vaccine czar that Canada will receive barely half of the COVID-19 shots that were expected to arrive by the end of April, due to a slower-than-expected start to planned production increases. Deliveries to the U.K. and other countries were also cut.

Procurement Minister Anita Anand said Friday shipments this month will now contain 650,000 doses instead of the planned 1.2 million doses. The manufacturer also warned that as many as 2 million of the 12.3 million shots scheduled for delivery by the end of June will instead be provided at the end of September.

Prime Minister Justin Trudeau, however, also announced an agreement to purchase 8 million more Pfizer Inc.-BioNTech SE doses. Four million are expected to arrive in May, with 2 million each in June and July.

The Canadian Medical Association called for urgent measures to address the “state of crisis unfolding in several provinces.” Health care resources, including vaccines, need to be moved across provincial and territorial borders to areas where the system is overwhelmed, the association said.

Vaccine hesitancy is an issue in some areas, particularly after health authorities suspended use of the AstraZeneca Plc vaccine for people under 55, given rare links to blood clots. Health Canada has updated warnings on the label but now says the benefits of the vaccine outweigh the risks.

Elsewhere in Canada, the situation is also worsening. The western province of British Columbia hit records for new cases and hospitalizations and on Thursday said new cases could double to 2,000 per day by May if people don’t reduce contact. Close to 60% of cases are now variants, roughly split between the U.K. and Brazil strains. Alberta and Saskatchewan are also seeing spikes.

In Quebec, a few regions have seen a surge in cases that’s threatening to fill Covid-designated hospital beds within three weeks, a government agency said Thursday. Parts of the province went back into lockdown this month, closing schools and non-essential stores. Widespread restrictions, including an 8 p.m. curfew, have sparked some protests over the past week.

Just over a quarter of Quebeckers have received a first vaccine dose and Premier Francois Legault wants everyone to get access to a jab by June 24, the province’s national holiday. But walk-in vaccination sites that use AstraZeneca are now struggling to attract patients, local media have reported.