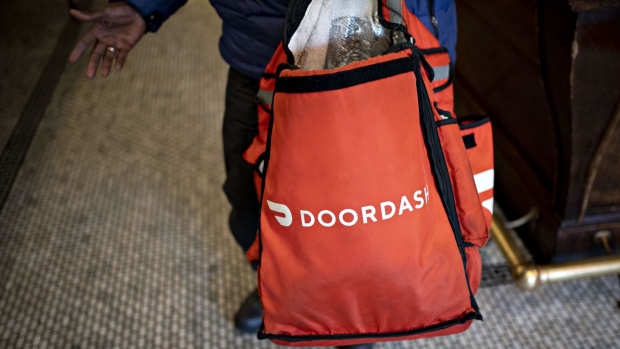 A DoorDash Inc. delivery person holds an insulated bag at Chef Geoff's restaurant in Washington, D.C., U.S., on Thursday, March 26, 2020. As the wheels of government turn too slowly for small businesses desperate for a piece of the $2 trillion U.S. relief package due to the coronavirus pandemic, restaurateur Geoff Tracy is using GoFundMe to raise money for 150 hourly workers at his American comfort food standby Chef Geoff's and other restaurants. , Bloomberg

Ontario has introduced legislation that would establish employment standards for gig workers, including minimum wage and regular paydays, but critics fear the plan will leave digital app workers with fewer rights than those in other jobs.

The Digital Platform Workers' Rights Act will be separate from the Employment Standards Act.

It proposes to cover ride hailing and delivery drivers, as well as others who are offered work assignments through digital platforms.

"We've seen huge shifts around traditional labour markets, and as we build a resilient economy, our government must keep pace with those changes," Premier Doug Ford said at a Toronto announcement where he and Labour Minister Monte McNaughton announced the details.

The gig economy is a growing employment sector, Ford said, adding that the province is speaking with those workers "and understanding how we can create the environment to help them thrive."

In an interview before the announcement, McNaughton said the legislation will establish foundational rights for gig workers in a Canadian first, though he expects other provinces will follow Ontario's lead.

"No gig worker should make less than minimum wage," he said.

"No gig worker should be fired without notice or explanation. And no one, period, should have to travel out of Canada to resolve a workplace dispute or sign a contract they don't understand. That's the essence of the changes we're making to fix these injustices that are happening."

Proposed rights within the bill, which was introduced Monday, include the guarantee that workers will get written information detailing how platforms' algorithms work, how pay is calculated, how operators’ performance rating systems work and how operators collect tips.

It would also establish a recurring pay period and a $15 minimum wage for active hours that's tied to the provincial minimum wage, while barring operators from withholding tips and prohibiting reprisal against workers for exercising their rights under the act.

The proposed legislation would also require operators to give workers notice of and rationale for their removal from a platform if they are removed for more than 24 hours, and it would see digital platform work disputes resolved in Ontario.

The bill won’t address the employment status of app-based gig workers – who are largely classified as contractors and not employees – but the province says it will give them employment rights.

Deena Ladd, executive director of the Toronto-based Workers' Action Centre, said the proposed law is a "substandard set of rights," as it doesn't cover employment standards like overtime and holiday pay or emergency leave.

"What they're proposing in this bill is actually really terrible for workers," she said in a telephone interview. "They are absolutely creating a category of workers that have less rights than regular workers."

Ladd said the proposed law could impact labour standards for other jobs.

NDP Leader Andrea Horwath said her party would be looking at the finer details but raised concerns over some apparent gaps in the minimum wage allowance, which wouldn't apply to time between assignments like rides or deliveries.

"Every worker deserves to be protected by the labour laws in Ontario and there should be no exceptions," she said.

"We see the changes announced today as the bare minimum the government can do to help those in the gig economy and look forward to sharing a real plan with the release of our platform," he said in a written statement.

Jim Stanford, economist and director of the Centre for Future Work in Vancouver, argued the Ontario government's plan wouldn't improve the income situation for gig workers.

Stanford pointed out on Twitter that couriers and delivery drivers spend much of their time on the job waiting for assignments – time that won’t count for minimum wage – meaning their wages will work out to less than $15 per hour. He also highlighted that workers for such apps pay their own expenses on their vehicles, phone and other work equipment.

"Make no mistake: This approach to regulating gig work will do absolutely nothing for gig workers," he wrote.

Establishing basic rights for gig workers was one of 21 recommendations put forward last year by a committee of experts tasked by the government with looking at labour market disruptions from the pandemic.

Earlier this month, McNaughton said the Progressive Conservative government would look into developing a "portable benefits" plan that isn't tied to employers, like for gig workers who don't have health or dental coverage.

An expert panel tasked with coming up with ideas for running that program is due to make recommendations this summer after the June election.