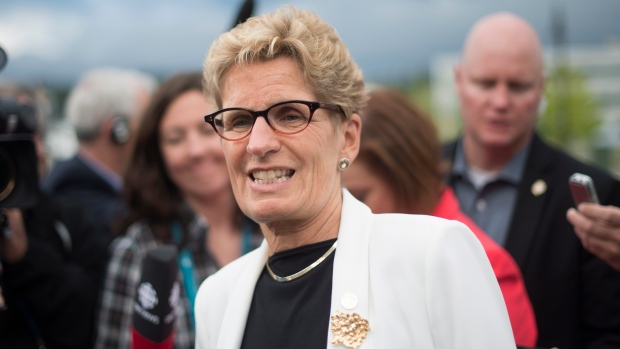 TORONTO -- Ontario will increase minimum wage to $15 an hour over the next 18 months as part of sweeping changes to labour laws, the province's Liberal government announced Tuesday, satisfying a long-standing demand of left-leaning voters one year away from an election.

The minimum wage increase was the centrepiece of a slew of reforms Premier Kathleen Wynne revealed in a campaign-style setting, including ensuring equal pay for part-time workers, increasing vacation entitlements and expanding personal emergency leave.

Wynne, whose party has been faring poorly in recent polls, said the changes, along with a number of her government's recent announcements, are her plan for a fair society.

"Our plan takes dead aim at the challenges that confront us in this new, uncertain world," she said, citing the Liberals' pharmacare plan, a basic income pilot project, 100,000 new child-care spaces, and a plan to cool the housing market.

"It puts fairness at the heart of all we do."

Ten per cent of Ontario workers currently make the minimum wage, Wynne said, and 30 per cent make less than $15 an hour.

"That's millions of people, many of them supporting a family on a wage that just doesn't go far enough," she said. "They're raising children, saving up for their education, wondering if they'll ever be able to get ahead on the monthly budget, let alone own a home."

Before the minimum wage increase to $15, however, there will be an election in June 2018.

NDP Leader Andrea Horwath, who has long pushed for a $15 minimum wage, suggested the Liberal government is only introducing the wage raise now to shore up votes for next year.

"I think it's clear to the people of Ontario that for Liberals it's always about them," she said. "It's always about them and their own political fortunes and what works for them politically, while for 14 years they've done nothing to address the erosion of people's standard of living."

Wynne also detailed plans to ensure part-time workers will get equal pay for doing work equal to full-time staff, and said that workers will be able to get three weeks of paid vacation a year after five years with a company, instead of two weeks.

The proposed changes are in response to a government-commissioned report released last week that included 173 recommendations addressing precarious work.

The province's changes to workplace laws will also establish fairer rules for scheduling, including making employers pay three hours of wages if they cancel a shift with fewer than 48 hours notice, Wynne said.

Personal emergency leave would also be expanded. Currently it is only available to employees at companies with more than 50 people, but proposed legislation would ensure all employees in the province get 10 days per year, two of them paid.

The government has planned for the majority of the labour standards changes to come into effect in early 2018.

Labour Minister Kevin Flynn said the government will table legislation before the house rises for the summer this week, with plans to send it to committee for consultations around the province over the summer.

Flynn said that even though some of the changes -- including the $15 minimum wage and rules concerning work scheduling -- will come to into force after the next election, they're not contingent on the Liberals being re-elected.

"Any political party wants voters to feel pretty good about you when you're going into an election, that's part of being in politics, but it's more than that," he said. "Today's really a good day for the little guy." 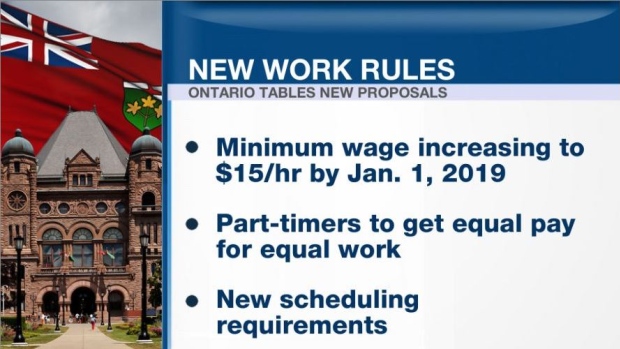 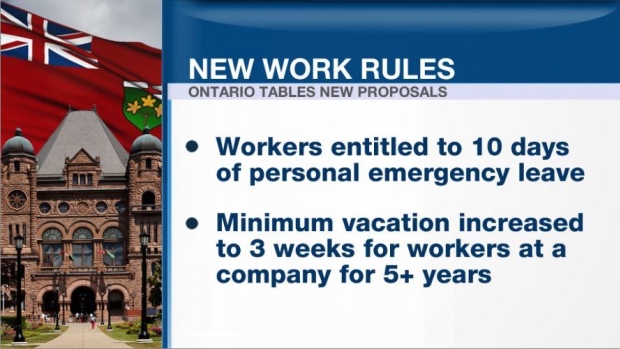 The Canadian Federation of Independent Businesses and a coalition of employer groups including the Ontario Chamber of Commerce objected to the proposed changes.

"We are shocked and appalled that the government is broadsiding small business owners with a 32-per-cent increase in the minimum wage within only one-and-a-half years," said CFIB director Julie Kwiecinski. "Small businesses, who don't share the larger profit margins of big business, will be forced to make difficult choices."

Flynn said, however, that there's a body of evidence that shows a higher minimum wage can benefit local economies and lead to job growth.

Progressive Conservative Leader Patrick Brown wouldn't say if he would cancel the planned minimum wage increase to $15 if he wins the 2018 election, but echoed concerns of businesses groups who have called for an economic impact study on the proposed changes.