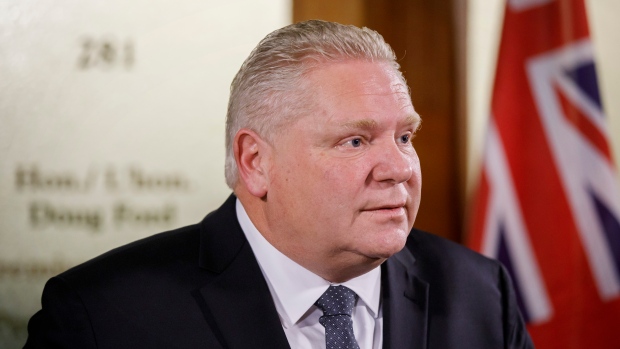 Ontario Premier Doug Ford is seen during a news conference as he announces a scholarship fund to honour the victims of the Iran plane crash, in Toronto, Thursday, Jan. 16, 2020. , The Canadian Press

It came as the province announced 17 new confirmed cases -- its biggest surge to date -- bringing the total to 59.

The decision to close schools from March 14 to April 5 is based on advice from Ontario's chief medical officer of health, Ford said in a joint statement with Health Minister Christine Elliott and Education Minister Stephen Lecce.

"We recognize the significant impact this decision will have on families, students, schools, as well as the broader community, but this precaution is necessary to keep people safe," they said.

Health officials said one of the new patients is a baby boy, who was in close contact with another patient and attended North York General Hospital in Toronto. It doesn't appear any of the cases were due to community transmission.

Ontario is days away from opening a wave of dedicated COVID-19 assessment centres, the province announced Thursday.

They will be located in separate spaces to protect other patients. More centres are set to be established across the province in the next few weeks.

The province also announced it will extend the one-year transition funding that it offered to municipalities to help deal with public health funding cuts that took effect this year.

Given the rapidly changing domestic and global situation with the virus, the provincial government house leader said Thursday he is working on a motion with opposition leaders that would allow for the suspension of the legislature if necessary.

It will already not sit after Thursday until March 23, and Paul Calandra said such a motion would be a way to extend that break without proroguing the legislature.

The Progressive Conservative government is set to table its budget March 25.

"It is our goal, obviously, to present a budget in the legislature and I think that is very important to us," Calandra said. "I think that's the place where it should happen."

Premier Doug Ford and several top cabinet ministers were in Ottawa on Thursday for a first ministers' meeting, but the in-person discussions were postponed after Prime Minister Justin Trudeau and his wife, Sophie Gregoire Trudeau, went into self-isolation. Gregoire Trudeau had recently begun exhibiting mild flu-like symptoms following a trip to London.

Ford returned to Toronto to assist in overseeing the COVID-19 response, his spokeswoman said.

Ontario has also approved new physician billing codes for telephone assessments, which will allow doctors to do more evaluations remotely, rather than having people come into their clinics. The province is also in the early stages of planning to establish at-home testing.

Toronto Mayor John Tory said he will be assessing COVID-19's economic impact on the city and looking for ways to protect jobs and the economy.

"These events have already extracted a heavy cost, from conferences cancelled, to restaurant tables not filled, to hotel rooms that are empty, and to workers' hours that have been lost and will be lost," he said. "That total cost will expand as we exercise greater care, as we're discussing today, and as the days pass."

Other new patients reported Thursday are in regions across southern Ontario, including Toronto, Peel, Waterloo and Muskoka, and all have been released into self-isolation.

Some of the patients had recently travelled to places including the United States, Spain and Italy. The 59 total cases included five that have been resolved, meaning the patients have had two negative tests at least 24 hours apart.

Most people diagnosed with COVID-19 experience mild or moderate symptoms, such as fever and cough, and the vast majority of those who contract the virus recover.