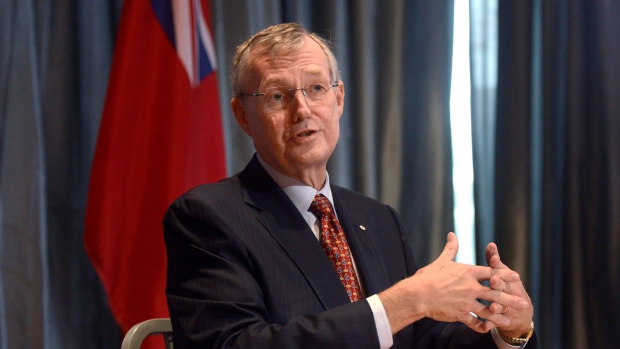 TORONTO -- Health Minister Eric Hoskins says he'll act on a recommendation to give patients access to their electronic medical records as the province updates the mandate of eHealth Ontario.

The Liberal government's privatization czar, Ed Clark, recommended eHealth's role be refocused more on service delivery, and said patients should be able to interact with their own personal health information.

"We must bring patients into the system and give them access to their own information, and in doing so we must continue to focus on security and privacy of patient health records," he said. "There's no reason why you couldn't build an app to connect into that (eHealth system of electronic medical records)."

"All are creating important health information about Ontario's 14 million patients and health care service users, and all need information to provide the best care possible for patients," said Clark.

"eHealth Ontario's work, while foundational in nature, reflects only a portion of the activities taking place across Ontario's health care sector to digitalize health care."

Clark, a former TD Bank CEO, said eHealth's true value is "significantly higher" than the $5.7 billion estimated by Canada Health Infoway, which he noted is greater than the cost of building the agency. He doesn't think eHealth or any of the agency's assets should be sold to the private sector.

"eHealth, particularly in the last two years, has made good progress and has built core IT infrastructure," he said. "No one took (privatization) seriously. It was an invention of the media to be honest."

Hoskins called Clark's recommendations consistent with his focus on a "patients-first" system, and said the valuation of eHealth gives the government "greater clarity how to best leverage and manage" the assets going forward.

Hoskins also insisted there will be no sale of eHealth or any of its assets.

"I want to be clear: there will be no sale of people's personal health information."

But the New Democrats worry the Liberals will privatize eHealth. Hoskins is talking about eHealth the same way the Liberals talked about Hydro One when they decided to privatize the giant utility, said NDP finance critic Catherine Fife.

"They said very clearly they weren't going to sell off Hydro One, and they're using the exact same language (about eHealth): broadening, augmenting, modernizing, leveraging," said Fife. "They've got their privatization thesaurus out and they're using it day in and day out."

Clark said the ministry of health should take on some of eHealth's duties.

"We do need to crisp up what the ministry does and what eHealth does, and the ministry really has to be clear in its own core decisions," he said. "They're on the verge of doing some very important things, but I think they can be re-scoped to a narrower focus."

Former health minister David Caplan was forced to resign in 2009 when a report showed eHealth had spent $1 billion to create electronic medical records, but had practically nothing to show for what was spent.

Clark admitted eHealth "has not always met what were very ambitious timelines," but rejected suggestions the government messes up every large project involving new computer systems. He said the public often doesn't hear about similar screw ups by private companies, but governments end up with public inquiries.

"So it's not obvious to me that there's some inherent issue here, other than it's a very difficult environment to work in if every time there's the slightest error, someone jumps on you," he said.