Khalid Al-Falih Minister of Energy, Industry and Mineral Resources of Saudi Arabia speaks to journalists prior to the start of a meeting of the Organization of the Petroleum Exporting Countries, OPEC, at their headquarters in Vienna, Austria, Wednesday, Nov. 30, 2016. , AP Photo/Ronald Zak

VIENNA - OPEC agreed on Wednesday its first oil output cuts since 2008 after Saudi Arabia accepted "a big hit" on its production and dropped its demand on arch-rival Iran to slash output.

Non-OPEC Russia will also join output reductions for the first time in 15 years to help the Organization of the Petroleum Exporting Countries prop up oil prices.

Oil prices soared more than 10 per cent on Wednesday to the highest in a month as some of the world's largest producers agreed to curb production for the first time since 2008 in a bid to support prices.

Crude prices were also on track to have risen over 5 per cent this month. However, they were unlikely to skyrocket further in reaction to the deal and the rally may even be short-lived, traders and analysts said.

"OPEC has proved to the skeptics that it is not dead. The move will speed up market rebalancing and erosion of the global oil glut," said OPEC watcher Amrita Sen from consultancy Energy Aspects.

Iran and Russia are effectively fighting two proxy wars against Saudi Arabia, in Yemen and Syria, and many skeptics had said the countries would struggle to find a compromise amid frosty political relations.

Saudi Energy Minister Khalid al-Falih said ahead of the meeting that the kingdom was prepared to accept "a big hit" on production to get a deal done.

OPEC produces a third of global oil, or around 33.6 million barrels per day, and under the Wednesday deal it would reduce output by around 1.2 million bpd from January 2017.

Saudi Arabia will take the lion's share of cuts by reducing output by almost 0.5 million bpd to 10.06 million bpd. Its Gulf OPEC allies - the United Arab Emirates, Kuwait and Qatar - would cut by a total 0.3 million bpd.

Iraq, which had insisted on higher output quotas to fund its fight against Islamic State militants, unexpectedly agreed to reduce production - by 0.2 million bpd.

Iran was allowed to boost production slightly from its October level - a major victory for Tehran, which has long argued it needs to regain market share lost under Western sanctions.

"If you get this deal done, it would be huge. You remove a lot of oil from the market and you get the

He said oil could rise to $55 per barrel.

Falih had long insisted OPEC would do an output-limiting deal only if non-OPEC producers contributed.

OPEC president Qatar said non-OPEC producers had agreed to reduce output by a further 0.6 million bpd, of which Russia would contribute some 0.3 million.
Russia, which had long resisted cutting output, pushed its production to new record highs in recent months.

"Russia will gradually cut output in the first half of 2017 by up to 300,000 barrels per day, on a tight schedule as technical capabilities allow," Russian Energy Minister Alexander Novak told a briefing in Moscow.

Novak, who spoke an hour after OPEC announced its deal, did not say from which output levels Russia would cut.

A combined output reduction of 1.8 million bpd by OPEC and non-OPEC represents almost 2 per cent of global output and would help the market clear a stocks overhang, which had sent prices crashing from levels as high as $115 a barrel seen in mid-2014.

* Reference base to crude oil production adjustment is Oct. 2016 levels, except Angola for which Sept. 2016 is used, and the numbers are from Secondary Sources, which do not represent a quota for each member country. Data courtesy of Dr. Ellen R. Ward.

Libya and Nigeria were exempted from cuts, while Indonesia had its membership suspended.

Non-OPEC Azerbaijan and Kazakhstan have said they might also cut.

OPEC suspended Indonesia's membership on Wednesday since the country, a net importer, could not cut output, Qatar said.

The move will not affect OPEC's overall reduction as Indonesia's share of cuts will be redistributed among other members.

Bob McNally, president of Washington-based consultancy Rapidan group, said on Twitter that compliance with cuts would be key: "In deals with Russia, OPEC is like (the late U.S.) President(Ronald) Reagan used to say: 'Trust but verify'."

OPEC will hold talks with non-OPEC producers on Dec. 9. The organization will also have its next meeting on May 25 to monitor the deal and could extend it for six months, Qatar said. 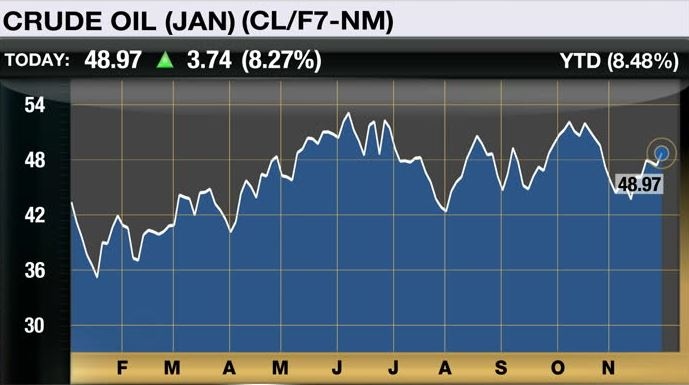