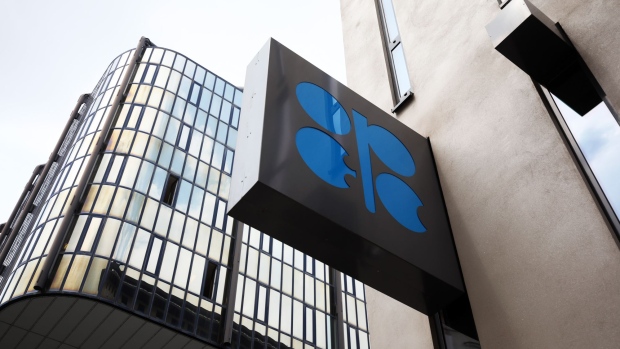 An OPEC sign hangs outside the OPEC Secretariat ahead of the 172nd Organization of Petroleum Exporting Countries (OPEC) meeting in Vienna, Austria, on Wednesday, May 24, 2017. OPEC and non-OPEC countries meet on Thursday in Vienna to approve the rollover as delegates say the nine-month extension has broad support. , Bloomberg

A key Senate committee is expected to approve legislation allowing the U.S. to sue the Organization of Petroleum Exporting Countries for manipulating energy markets. The vote by the Senate Judiciary Committee on Thursday would pave the way for full Senate consideration.

While the so-called Nopec bill has been introduced many times over the past two decades -- never to any avail -- it now comes as record pump prices stoke already historic inflation.

“Its prospects for passage look better than they have in 15 years,” said Kevin Book, managing director of ClearView Energy Partners.

READ: Why ‘NOPEC’ Keeps Arising as a U.S. Answer to OPEC: QuickTake

Whether such a measure could actually rein in runaway prices is another matter. The oil market has been upended since the bill last gained traction in 2019, reshaped by a global pandemic that briefly destroyed demand and supply war between Saudi Arabia and Russia that flooded the market with crude and helped send oil futures below zero for the first time ever.

Now, the world is short on oil, with Russia frozen out of international trade and OPEC and its allies contending with capacity constraints that limit their ability to raise output. The U.S., as the world’s No. 1 oil producer, has the most power to tame prices by raising production, but companies enjoying historic profits are reluctant to accelerate growth.

It’s unclear when, or if, Senate Majority Leader Chuck Schumer will bring the measure, authored by Iowa’s conservative Republican Chuck Grassley, to the floor.

One path forward would be to incorporate the bill into a broader supplemental spending package being considered by Congress to provide aid to war torn Ukraine, according to Clearview. “If that were to occur, the bill could become law within a matter of weeks,” the firm said in a note.

It’s also unclear whether President Joe Biden, who has appealed to OPEC to raise production in response to high prices, would sign a bill targeting the cartel.

When Congress passed a version of the bill in 2007, it died under veto threat from President George W. Bush who said it could lead to oil supply disruptions as well as “retaliatory action against American interests.”