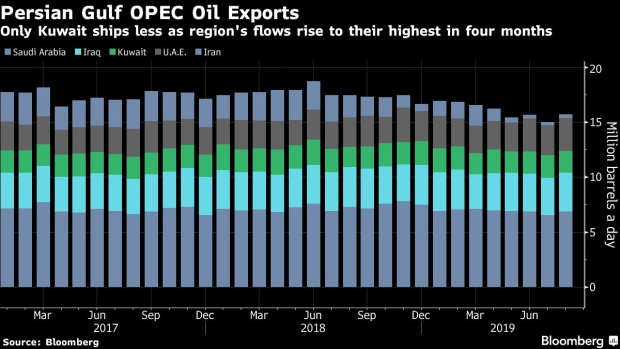 A support vessel flying an Iranian national flag sails alongside the oil tanker 'Devon' as it prepares to transport crude oil to export markets in Bandar Abbas, Iran, on Friday, March 23, 2018. Geopolitical risk is creeping back into the crude oil market. Photographer: Ali Mohammadi/Bloomberg , Bloomberg

(Bloomberg) -- OPEC’s Middle East oil exporters boosted crude supplies to their highest level in four months in August, even as the group’s biggest producer Saudi Arabia said that it won’t tolerate a continued slide in prices and is considering all options.

Saudi Arabia, Iraq, Kuwait, the United Arab Emirates and Iran, which together account for about three quarters of OPEC’s entire production, shipped an average of 15.73 million barrels a day of crude and condensate in August, tanker tracking data compiled by Bloomberg show. That was an increase of 736,000 a day from July.

Flows of crude and condensate, a light form of oil extracted from gas fields, rose from four of the five regional exporters, with only Kuwait shipping less oil last month than it did on July. The biggest increases came from Saudi Arabia and the U.A.E., whose exports were each up by more than 300,000 barrels a day. Iraq’s exports from its Persian Gulf Basra Oil Terminal rose by 150,000 barrels and Iran’s observed shipments were up by 65,000 barrels. In contrast, shipments from Kuwait fell month-on-month by 106,000 barrels a day.

Observed shipments from Iran rose to 360,000 barrels a day last month, from a revised 295,000 in July. Those figures may underestimate actual flows because tracking signals haven’t been received for more than a week from 37 Iranian tankers, out of a fleet of 48 vessels. While many of the ships are probably being used to store crude or condensate close to the Iranian coast, they could also have loaded a cargo in August and departed while running dark.

With more than 40 million barrels of oil on ships that are yet to signal a final destination, estimates of flows to individual countries are subject to revision.

Persian Gulf crude flows to India, the closest major market, recovered in August, from a July level that was the lowest in two years. Iraq dominated the trade, accounting for 45% of the region’s shipments to India last month. Flows from Kuwait fell to their lowest in a year.

Outflows to the U.S. increased for the first time in nine months, driven by a jump in shipments from Saudi Arabia. Still, they remain 58% below their year-earlier level and have been below 1 million barrels a day every month so far this year.

The higher liftings should begin to show up in import data around the middle of September, when cargoes loaded in early August will start to reach the Gulf of Mexico or the West Coast. Additional vessels, whose destinations remain unclear, may yet head to the U.S.

Observed shipments from Persian Gulf OPEC countries to China, their biggest customer, were down month-on-month, but will probably pare or reverse that decline as more ships reveal their final destinations. Iraq boosted shipments to the Asian country to their highest since February and their second-highest since at least January 2016, when Bloomberg began tracking flows in detail.

Shipments in August to Japan were little changed from July at slightly below 2 million barrels a day. The trade is dominated by the U.A.E. and Saudi Arabia, which accounted for 45% and 41% of flows respectively last month, with the remainder shipped from Kuwait.

Flows to South Korea, the other big Asian buyer of Persian Gulf crude, dropped to their lowest since the OPEC+ output cuts began in January 2017. Saudi Arabia and the U.A.E. both shipped smaller volumes to the country, but the volumes of crude sailing to unknown destinations from both these countries could alter that picture.

Note: The figures above exclude exports from northern Iraq via Ceyhan in Turkey but include outflows from the U.A.E.’s Indian Ocean coast and from Saudi Arabian Red Sea ports. They include crude and condensates, a light form of oil extracted from gas fields. Figures for flows to individual destinations are subject to change, especially when ships pass transit points like Singapore and the Suez Canal.

To contact the reporter on this story: Julian Lee in London at jlee1627@bloomberg.net

To contact the editors responsible for this story: Alaric Nightingale at anightingal1@bloomberg.net, John Deane, Brian Wingfield