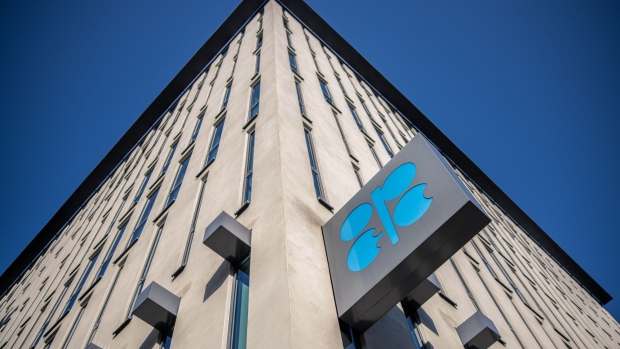 An OPEC sign hangs outside the OPEC Secretariat as night falls during the 175th Organization Of Petroleum Exporting Countries (OPEC) meeting in Vienna, Austria, on Thursday, Dec. 6, 2018. The Organization of Petroleum Exporting Countries and its allies are desperate to shore up oil prices after a slump of more than $20 a barrel since October. Photographer: Stefan Wermuth/Bloomberg , Bloomberg

(Bloomberg) -- OPEC+ will hold its Dec. 4 meeting online, a change of plan for a gathering that had been scheduled to be conducted in person in Vienna, according to people familiar with the situation.

It had been shaping up to be a significant set of talks for the group, with oil having erased most of its gains for the year due to the risk of recession in the West and unrest in China over its Covid-zero policies. There were some predictions on Monday that the group might cut output again.

After the shift to virtual talks, some OPEC-watchers were downplaying expectations of a policy change.

“The OPEC work-from-home decision increases the focus on Monday” when the European Union imposes a ban on most imports of Russian crude, said Helima Croft, chief commodities strategist at RBC. Those sanctions have become “the main end-of-year oil market event.”

The EU is also in talks on setting a price cap for Russian crude, which could have a further impact on the country’s exports. Negotiations remain stuck due to differences between nations such as Poland that want the level set as low as $62 a barrel, and others including Greece that are asking for a higher price.

At their last meeting in October -- the first to be held in person since the pandemic -- the Organization of Petroleum Exporting Countries and its allies agreed on a surprise 2 million barrel-a-day production cut. The market has deteriorated to such an extent since then that delegates said on Monday the group might discuss an additional cut at the Dec. 4 meeting.

Out of 17 traders and analysts surveyed by Bloomberg this week, 10 anticipated a new supply cutback, with estimates ranging from 250,000 to 2 million barrels a day.

The oil price reaction suggested these expectations were being revised, Brent crude paring earlier gains to trade near $83 a barrel in London.

The 23-nation OPEC+ alliance is likely to simply roll over its existing cuts -- which are formally in place to the end of 2023 -- as it studies how they affect the market and awaits clarity on Russian supplies, according to consultant Energy Aspects Ltd.

“OPEC+ want to see how their recent cuts help reduce the overhang first, especially with the EU embargo coming,” said Amrita Sen, the firm’s chief oil analyst and co-founder. “If it’s a quick meeting with a rollover, they don’t need to meet in person.”