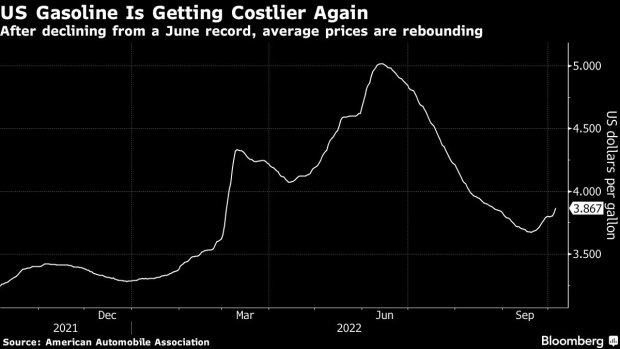 Gas prices at a Shell gas station in San Francisco, California, US, on Monday, Oct. 3, 2022. California Governor Gavin Newsom called for a windfall tax on oil companies and allowed for production of a cheaper blend of gasoline as the state faces a surge in fuel prices. , Bloomberg

(Bloomberg) -- Saudi Arabia’s backing for a surprise OPEC+ oil production cut a month before the US midterms is a blow to Democrats’ election prospects and further strains an alliance that was once a linchpin of the nation’s Middle East diplomacy.

Though analysts anticipate only modest increases in the price of gasoline in the coming weeks, the oil cartel’s move refocuses public attention on a flash point of consumer anger over the rising cost of living. Steady declines in pump prices since June have already bottomed out, with the national average retail price climbing 19 cents a gallon since Sept. 19 to $3.87.

The rise in gasoline prices, the result of tight inventories rather than the actions of OPEC+, is coming just as voters are getting ready to cast ballots that will decide which party controls Congress for the next two years. It is particularly bad news for Democrats, who have only the narrowest majorities in the House and Senate and have been trying to fend off Republican attacks blaming them and President Joe Biden for inflation.

“There is no personal financial issue that is more consequential to most voters as gas prices,” Republican pollster Robert Blizzard said. “Gas prices are on the rise, that is a challenging position for any Democrat on the ticket because it reinforces concerns about inflation, costs, and the inability of this administration to get personal pocketbook issues under control.”

Rob Thummel, senior portfolio manager at TortoiseEcofin, said in an email that he expects national average gasoline prices to rise over the next month to $4 a gallon or higher. He said he didn’t expect the OPEC+ decision “to dramatically increase oil prices which often result in higher gasoline prices in the short-term.”

Still, the timing of the OPEC+ decision enraged congressional Democrats, many of whom already consider Saudi Crown Prince Mohammed bin Salman a dictator and human rights abuser who they hold responsible for the killing of journalist Jamal Khashoggi.

“The royal Saudi family has never been a trustworthy ally of our nation,” Dick Durbin, the Senate’s second-ranking Democratic leader, tweeted. “It’s time for our foreign policy to imagine a world without their alliance.”

Within hours of the OPEC+ announcement, three swing district Democrats -- New Jersey’s Tom Malinowski, Pennsylvania’s Susan Wild and Illinois’ Sean Casten -- said they planned to introduce a bill to remove all US troops and missile defense systems from Saudi Arabia and the United Arab Emirates, another OPEC member that supported the production cuts.

“This decision is a turning point in our relationship with our Gulf partners. If Saudi Arabia and the UAE hope to maintain a relationship with the United States that has been overwhelmingly beneficial to them, they must show a greater willingness to work with us — not against us,” they said in a statement.

Durbin and Republican Senator Chuck Grassley of Iowa called for revival of legislation, which has had bipartisan support, that would allow the US to take the dramatic step of suing the Organization of Petroleum Exporting Countries for manipulating the energy market, potentially seeking billions of dollars in reparations.

Other Democrats also expressed anger at the Saudi role.

“The United States should make it clear that if the Saudis do not reverse their decision within five days, that we will stop supplying them with the parts to their air force, we will stop selling weapons to them,” California Representative Ro Khanna said in an interview. “They continue to fleece the American people, we’re not just going to sit by and allow them to do this.”

Biden said he’s disappointed by the surprise OPEC+ decision, but that he doesn’t regret a trip he made to Saudi Arabia just three months ago in which he urged its leaders to keep crude flowing. The visit was assailed by human rights activists and other critics.

“We’re looking at what alternatives we may have,” Biden told reporters Thursday at the White House. “We haven’t made up our mind yet.”

There is bipartisan antipathy toward Saudi Arabia. In 2020, the rationale was flipped, as then-President Donald Trump was pressuring Saudi Arabia to cut production to boost prices for US producers after oil prices crashed with demand during the early days of the coronavirus pandemic. Republican Senator Bill Cassidy, who represents the oil-producing state of Louisiana, introduced legislation to pull US troops from Saudi Arabia and apply a tariff on imported oil. A year earlier, Congress passed with bipartisan votes a bill to block arms sales to Saudi Arabia over the 2018 murder of Khashoggi. It was vetoed by Trump.

However, Saudi Arabia and OPEC+ won’t be on the November ballot.

The cut in oil output “shifts the conversation from what Democrats want to be talking about --weaknesses of the GOP and abortion -- to things Republicans want to talk about,” University of Virginia political analyst Kyle Kondik, said. “I don’t think Democrats have an effective response on inflation.”

Republicans seized on the announcement to blame Biden for leaving the US too vulnerable to foreign oil suppliers.

Republican Representative Kevin Brady said the production cuts “could not have come at a worse time,” but said the real issue is that Democrats have pursued a climate agenda that he said discouraged domestic production.

“The obvious solution is to reverse the policy and maximize American energy production,” the Texas Republican said on Bloomberg Television’s “Balance of Power with David Westin.” He said Biden gambled in meeting with the crown prince during a visit to the kingdom in July. “They snubbed him,” Brady said.