Oil prices could move to $100 per barrel: BMO's Randy Ollenberger

OPEC+ abandoned its meeting without a deal, tipping the cartel into crisis and leaving the oil market facing tight supplies and rising prices.

Several days of tense talks failed to resolve a bitter dispute between Saudi Arabia and the United Arab Emirates, delegates said, asking not to be named because the information wasn’t public. The group didn’t agree on a date for its next meeting, according to a statement from OPEC Secretary-General Mohammad Barkindo.

The most immediate effect of the breakdown is that, unless an agreement can be salvaged, the Organization of Petroleum Exporting Countries and its allies won’t increase production for August. That will deprive the global economy of vital extra supplies as demand recovers rapidly from the coronavirus pandemic.

However, the situation is fluid and the group could reactivate talks at any moment. With prices up about 50 per cent this year and climbing toward US$80 a barrel, the producers’ group may feel extra pressure from consuming countries concerned about rising inflation.

“Oil prices will pop if no deal means current production levels continue,” said Jason Bordoff, director of the Center on Global Energy Policy at Columbia University. “But that’s also not tenable because a price spike actually undermines the interests of the UAE, Russia and Saudi Arabia.” 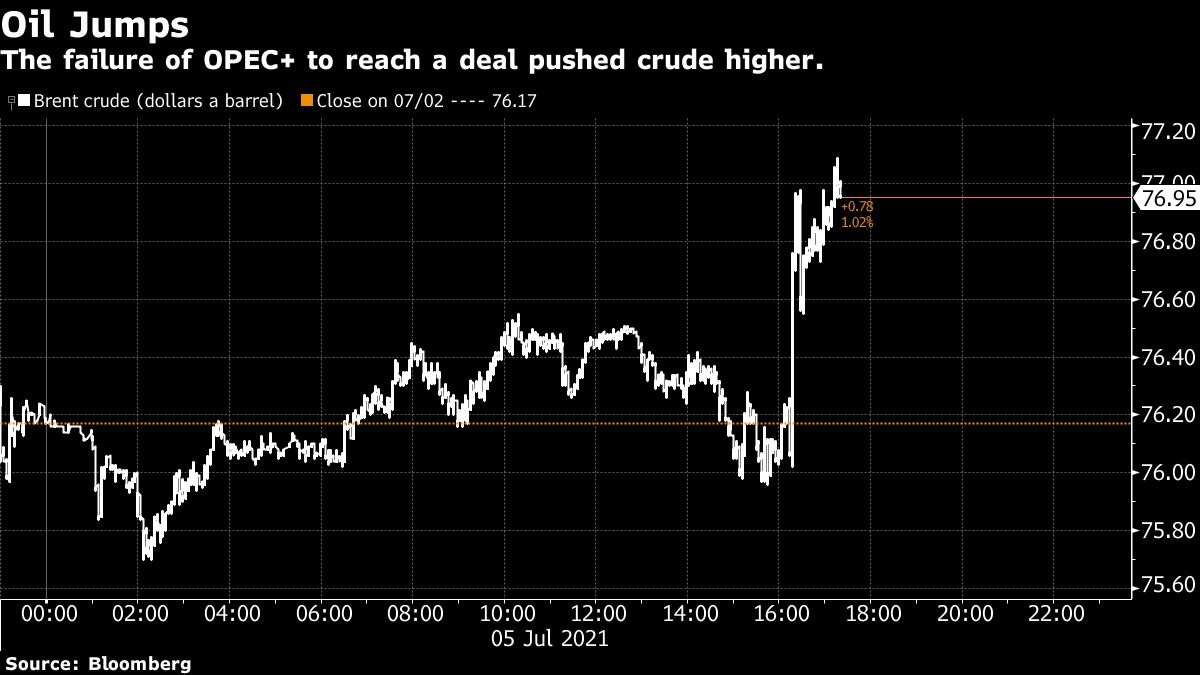 The outcome is a significant failure for the producers’ group. Relations have soured between two core OPEC members to such an extent that no compromise was possible. It damages the group’s self-image as a responsible steward of the oil market, raising the specter of the destructive internal price war that caused unprecedented price swings last year.

OPEC+ has already been reviving some of the crude supplies it halted last year in the initial stages of the pandemic. The 23-nation coalition decided to add about 2 million barrels a day to the market from May to July, and the question before ministers on Monday was whether to keep going in the coming months.

The cartel’s own data show that once-bloated oil inventories are back down to average levels as the recovery in fuel consumption continues. Demand in the second half will be 5 million barrels a day higher than in the first six months of the year, Barkindo said last week.

Responding to these pressures, OPEC+ was close to a deal last week to boost supply by 400,000 barrels a day each month, while also extending the expiry of its deal from April to December 2022. At the last minute, the UAE said it would only accept the proposal if it was granted the same terms for calculating its quota as the Saudis

The UAE said throughout that it would accept the output increase without the deal extension, but the Saudis argued that the two elements must go together.

The dispute escalated over the subsequent days into an increasingly personal and unusually public fight, with the ministers pressing their arguments in separate TV interviews. Behind the scenes, mediation attempts by other OPEC+ members made no progress, delegates said, and the rift was evident in wider diplomatic tensions beyond oil.

“Growing differences of opinion over foreign, economic and security policies between Riyadh and Abu Dhabi, as well as over oil policy itself, will complicate future OPEC discussions,” said Amrita Sen at consultant Energy Aspects Ltd. in London. “No additional oil in August, at a time when the physical market is incredibly tight, can easily lead to prices overshooting above US$90 a barrel,”