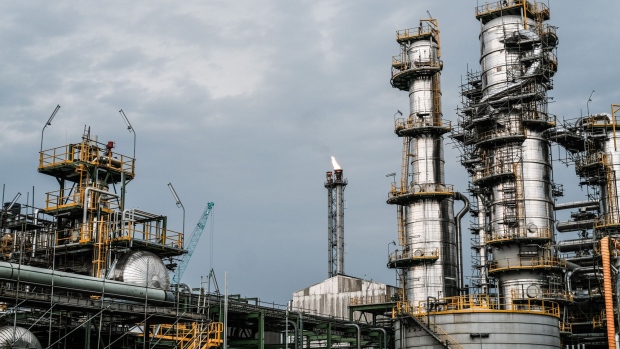 A flame rises from a gas flare stack at the under-construction Dangote Industries Ltd. oil refinery and fertilizer plant site in the Ibeju Lekki district, outside of Lagos, Nigeria, on Friday, March 6, 2020. Aliko Dangote, Africa’s richest man, plans to spend more than his net worth of $13.5 billion building one of the world’s biggest oil refineries. , Bloomberg

(Bloomberg) -- OPEC+ decided not to increase production next month, sending prices soaring in a market that had been expecting additional supply.

The cartel had been debating whether to restore as much as 1.5 million barrels a day of production, but after being urged to “keep our powder dry” by Saudi Arabia delegates said they decided to hold output steady at current levels. Brent crude rose 5% in London.

The decision is a victory for the Gulf kingdom, which has consistently pushed for tighter production restraints. It leaves the world facing a significant supply squeeze and higher energy costs just as widespread vaccination allows economies to start emerging from the downturn caused by the pandemic.

Crude has already rallied more than 25% this year to about $67 a barrel in London as OPEC+ kept production below demand in order to drain the glut that built up during the worst of the Covid-19 lockdowns. Without additional supply, that deficit will widen significantly in April, according to the cartel’s internal estimates.