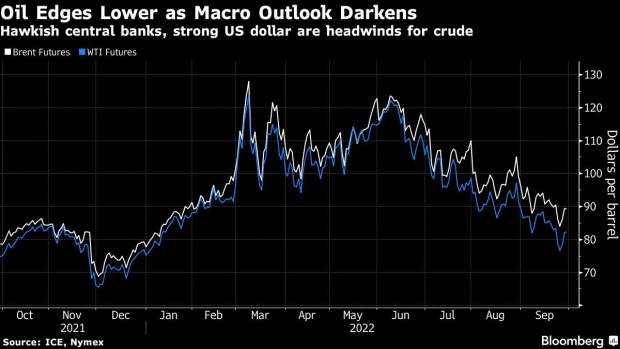 OPEC+ has begun discussions about lowering oil output when it meets next week, as a fragile global economy continues to weigh on crude prices.

The size of any supply reduction is still under consideration, said delegates, asking not to be identified as the talks are private. The Organization of Petroleum Exporting Countries and its allies will meet to decide November output levels on Oct. 5.

Oil prices have slumped by a fifth since early August as central banks become more hawkish and coronavirus lockdowns hinder China’s economy. The losses threaten the spectacular windfall being enjoyed this year by Saudi Arabia and other major producers.

Still, prices have risen this week, with Brent trading around $89 a barrel on Thursday, partly in anticipation of OPEC+ decreasing production.

The alliance, led by Saudi Arabia and Russia, showed its readiness to stabilize markets with a symbolic cut at its last meeting. Saudi Energy Minister Prince Abdulaziz bin Salman has vowed to remain “preemptive and pro-active,” while Nigerian Oil Minister Timipre Sylva said last week the group may be “forced” to make additional reductions if crude prices fall again.

“We don’t exactly know what we can do to fix this, but for us, the only instrument that is available is to cut production if prices go too low,” Sylva said.

Banks such as UBS Group AG and JPMorgan Chase & Co. have said OPEC+ may need to cut at least 500,000 barrels a day to stem the oil price slide. All but one of 19 traders and analysts in a Bloomberg survey predicted the 23-nation alliance will agree to a cutback.

“We certainly see a significant chance that the producer group will opt for a substantial cut to try to signal that there is indeed an effective circuit breaker in the market,” said Helima Croft, chief commodities strategist at RBC Capital Markets LLC. The drop could be as big a 1 million barrels a day, she said.

At its last meeting on Sept. 5, the group agreed a token reduction of 100,000 barrels a day for October, despite calls from consuming nations to help tame rampant inflation by keeping the taps open.

With gasoline prices retreating in the US since June, some of that external pressure may be easing. Saudi Crown Prince Mohammed bin Salman met US government officials including White House Middle East Coordinator Brett McGurk last week in Jeddah.

That came shortly after Prince Mohammed had a phone call with Russia’s President Vladimir Putin, during which they reaffirmed their commitment to OPEC+.