Crude stuck in a rut on demand destruction

Now that a resurgent pandemic is threatening demand once again, the moment of reckoning is getting closer.

The coalition of crude producers will hold a video conference at 3:30 p.m. Vienna time to assess the state of the market. No supply decisions are expected until Dec. 1, but leading members Saudi Arabia and Russia are already stepping up diplomacy.

President Vladimir Putin and Saudi Arabia Crown Prince Mohammed Bin Salman have spoken twice by phone in a week -- the first time the countries’ leaders have done that since the depths of the oil crisis in April, when they were hashing out a deal to cut supply and bring the price war to an end.

With oil stuck at around US$40, and more supply coming online from Libya, the cartel is now under pressure to revise its plan to ease those output cuts. It has already relaxed them by about 2 million barrels a day, and is due to add another 1.9 million in January.

While members are publicly sticking with that plan for now, OPEC Secretary-General Mohammad Barkindo acknowledged on Thursday that demand is “anemic” and the cartel will act to prevent a market “relapse.” Its own internal reports points to the risk of a new surplus. And in private, delegates admit they’re open to delaying the increase when a formal decision is taken in six weeks.

Influential voices in the market are already telling OPEC+ to be wary about the planned increase.

Trading houses like Mercuria Energy Group, banks including JPMorgan Chase & Co. and institutions such as the International Energy Agency are counseling that markets remain too fragile to easily absorb the additional barrels.

“Adding oil to the market at such a time is not an advisable gambit,” said Natasha Kaneva, an analyst at JPMorgan in New York.

These views may be considered during Monday’s online session of the Joint Ministerial Monitoring Committee, chaired by Saudi Arabian Energy Minister Prince Abdulaziz bin Salman and his Russian counterpart Alexander Novak. The panel won’t decide on next year’s supply, which will be finalized at the larger ministerial meetings on Nov. 30-Dec. 1. 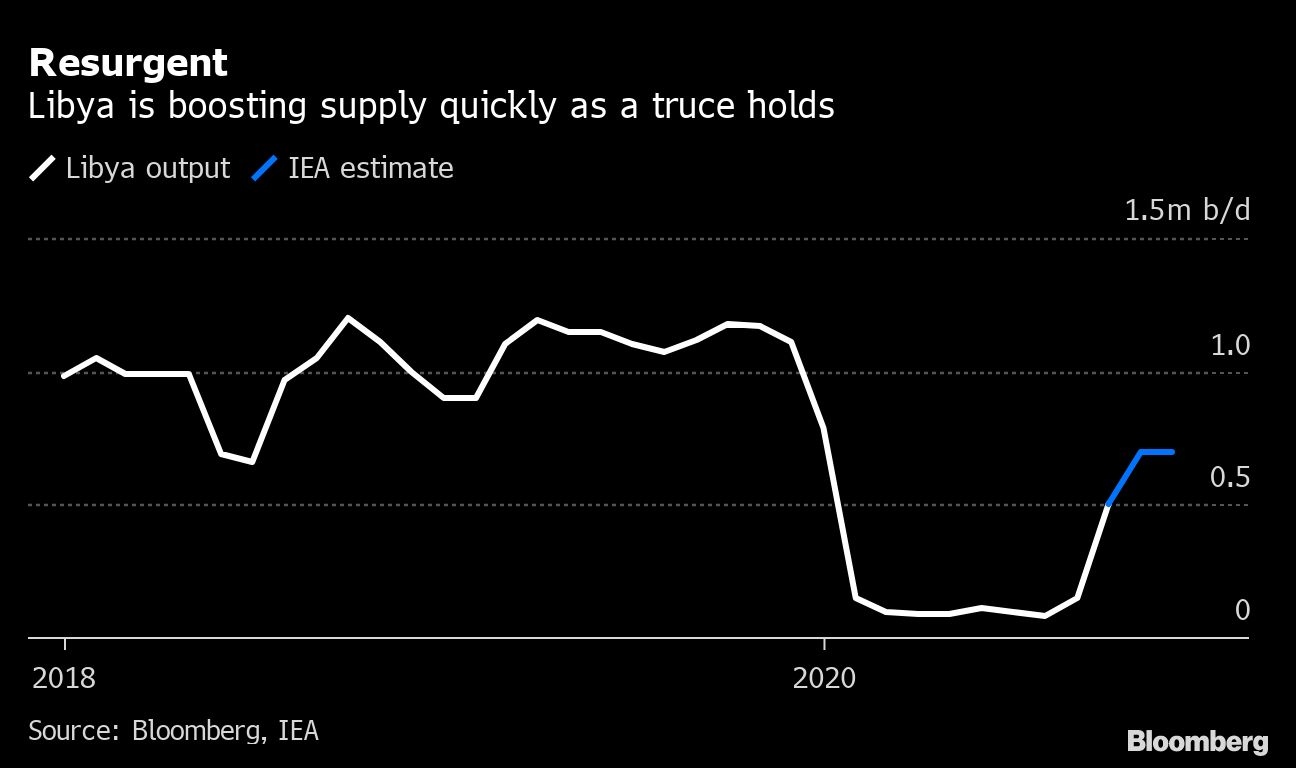 It’s a decision that will have profound implications not just for the Organization of Petroleum Exporting Countries -- many of whose member nations need prices significantly above current levels to cover government spending -- but also the wider industry, from shale drillers to majors like Exxon Mobil Corp.

There have been glimmers of hope for oil prices recently that producers must take care not to snuff out.

Global oil demand has recovered to 94% of pre-pandemic levels, depleting the world’s bloated inventories, the International Energy Agency estimates. Buyers in China, the world’s second-biggest consumer, are set to boost purchases after slowing down over the summer. Indian refiners are cranking up operations before the nation’s two main festivals.

Stronger consumption from the two Asian behemoths will play a big part in the final decision in December. Ministers will also consider data from other parts of the world as the virus spreads, and the result of the U.S. presidential elections in early November.

But a full return to prior levels of demand will take a couple of years, particularly for jet fuel, trading houses like Vitol Group and Trafigura Group predict. OPEC+ also needs to keep whittling away global stockpiles to avoid another glut and a plunge in prices.

If the group “adds production as scheduled in January, then we will not draw crude stocks anymore,” Torbjorn Tornqvist, chief executive officer of trading house Gunvor Group Ltd., said in an interview.

Another reason to postpone the increase has emerged recently as Libya, exempted from the effort to restrain supply, restores output.

The OPEC nation has boosted production five-fold in just a few weeks after a military commander allowed ports to reopen. It’s now pumping 500,000 barrels a day following the restart of its biggest oilfield, and the IEA estimates another 200,000 a day could be added by the end of the year.

An internal report presented at an OPEC+ technical committee last week showed the group is aware of the dangers. While its central scenario predicted that global oil stockpiles will decline by 1.9 million barrels a day next year, it cautioned that if Covid-19 hits demand harder than expected and Libya stages a strong recovery, inventories could instead accumulate slightly.

Delaying the planned output taper would bring its own complications, however, as countries would have to forsake the revenue additional production could bring.

Another issue will be clearing the backlog of compensatory supply cuts that nations like Iraq and Nigeria owe in return for flouting quotas in the initial months of the agreement. Saudi Arabia and Russia have urged fellow members to respect their output commitments as oil prices come under renewed pressure.

“Right now, when demand is fragile and Covid-19 cases are resurging, all the producers have an incentive to work together,” said Helima Croft, head of commodity strategy at RBC Capital Markets LLC.