Once the global oil market emerges from the coronavirus crisis, it may be greeted by a surprising change: greater dependence on crude from OPEC.

For the time being, the Organization of Petroleum Exporting Countries and its allies are relinquishing their share of the market in a bid to prop up crude prices, slashing millions of barrels of output as the pandemic crushes fuel demand.

They’d already spent the past three years forsaking sales volumes to offset the oil glut unleashed by burgeoning U.S. shale production. Before the pandemic, forecasters were projecting that the group would need to cut production further in coming years.

Yet the current upheaval could give OPEC another chance. As the oil-price collapse chokes off investment in new supplies around the world, from the mega-projects of Big Oil to drilling by U.S. shale wildcatters, some analysts see the cartel reviving its battered standing.

“From the point of view of oil-market share, OPEC will be a clear winner in the coming years,” said Michele Della Vigna, head of energy industry research at Goldman Sachs Group Inc. “Under-investment in the rest of the industry ultimately plays to their favour.” 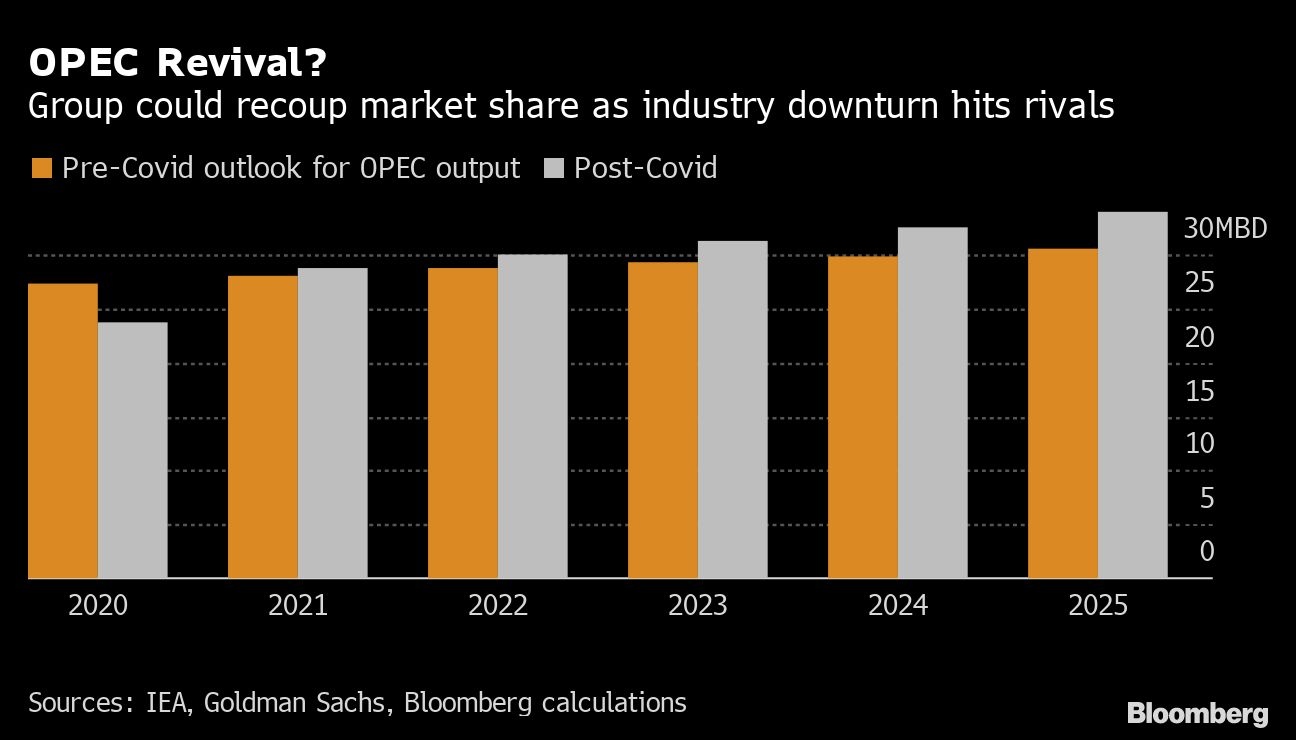 It’s a message that the organization should still treat with caution. Warnings abounded during the last decade that the plunge in investment which followed the 2014 oil-market crash would leave a supply gap for OPEC to fill. But the shortage never materialized as American shale proved surprisingly resilient.

Instead, the 60-year-old organization — led by Saudi Arabia and other Middle East exporters — found itself in late 2016 forming an alliance with erstwhile rivals, such as Russia, to curtail production. Last week this 23-nation network, known as OPEC+, reaffirmed it will keep output capped all the way through to 2022. The group’s monitoring committee meets again on June 18 for another review of the market.

It’s too early to tell whether the latest predictions of a supply gap will prove unfounded, or whether this time really is different. But initial indications do suggest that OPEC could re-emerge from the current round of cutbacks in a stronger position.

Before this year’s price rout, market-watchers projected that demand for the organization’s crude would dwindle as its rivals kept on growing.

In an annual outlook published in November, OPEC itself predicted that such demand would sink 7% by 2023, squeezed by both the relentless flood of American shale and new offshore supplies from Guyana and Norway. The International Energy Agency forecast that the volume required from OPEC wouldn’t rebound to last year’s levels until 2024.

Now the picture appears to be shifting.

Goldman Sachs forecasts that this “call on OPEC” may instead climb roughly 17 per cent between 2019 and 2025, reaching 34 million barrels a day. Rystad Energy A/S, a consultant based in Oslo, and Citigroup Inc. have also turned projections for demand declines into estimates of growth.

“Maybe it’s a reprieve,” said Ed Morse, head of commodities research at Citigroup. “The big threat from U.S. production growth of one million barrels a day per year ad infinitum — or at least through 2025 — is no longer present in the way it was.”

The price crash is upending the Trump administration’s ambitions of American “energy dominance.” U.S. crude production has plunged by 15% in the past two months, to just over 11 million barrels a day, according to government data. With spending in the shale sector slashed in half, according to IEA estimates, worse may be yet to come.

For Goldman, an even bigger issue than the shale slowdown is a 60-per-cent decline over the past five years in annual investment in long-term projects -- which particularly sustain output from OPEC’s rivals — to about US$37 billion. This will finally be felt next year, bringing supply growth outside OPEC to a halt, the bank says.

This year’s economic slump is only tightening the squeeze, reducing overall oil and gas investment by almost $250 billion, or about a third, according to the IEA. Oil majors such as BP Plc and Exxon Mobil Corp. have announced billions of dollars of cuts in capital expenditure.

The risk remains that OPEC’s current strategy of propping up oil prices with production cuts could throw rivals a lifeline.

Brent crude has more than doubled since late April to about $40 a barrel, and there are signs that U.S. shale drillers are seizing on the opportunity. EOG Resources Inc., America’s largest shale-focused producer, and Parsley Energy Inc. are ramping operations back up.

Nevertheless, investment delays amid the downturn have paved the way for a supply shortage in future years, said Per Magnus Nysveen, head of analysis at Rystad. In that environment, OPEC nations like Saudi Arabia and the United Arab Emirates — with much lower production costs and massive hydrocarbon resources — may be best placed to grab market share.

“The deferrals in investments in the current downcycle have created the conditions for an under-supplied 2025,” Nysveen said. The Middle Eastern OPEC countries “will be crucial to bridge the balances.”