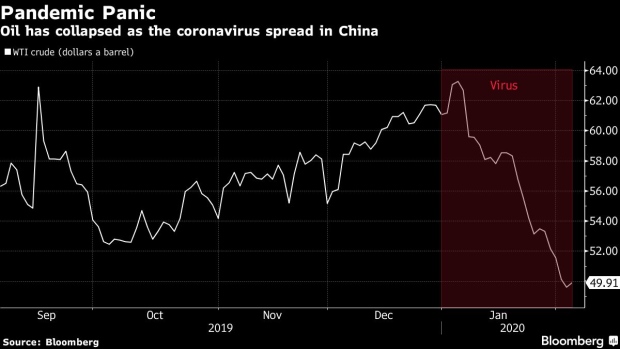 (Bloomberg) -- OPEC+ officials gathered in Vienna for a second day of debate on the impact of the coronavirus, a process that could result in an emergency ministerial meeting where Saudi Arabia would push for an oil-production cut.

The price of crude has plunged on expectations that the epidemic will squeeze China’s economy and curtail consumption of oil in the world’s biggest importer. That’s prompted Saudi Arabia to advocate for urgent action from Organization of Petroleum Exporting Countries and it allies, but its efforts have repeatedly run up against Russia‘s reluctance to cut deeper.

The true impact of the virus also remains highly uncertain, clouding the cartel’s decision making. Estimates of how much demand will be wiped out in the coming months vary widely, with OPEC’s internal analysis predicting a modest impact but outside estimates showing the biggest hit to consumption since the 2008 to 2009 financial crisis.

“It’s a dilemma for the group because the duration of the hit to oil demand -- particularly from China, the world’s largest oil importer -- is not clear,” Ann-Louise Hittle, Vice President of macro oils at Wood Mackenzie Ltd. said in a note. “Yet, without a further production cut, crude oil prices will remain under pressure.”

As the OPEC+ Joint Technical Committee convened in Vienna, diplomatic efforts between Riyadh and Moscow continued in parallel. Saudi Arabia was pushing for a production cut of at least 500,000 barrels a day -- and even up to twice that amount, two delegates said Tuesday. Russia, whose budget is more resilient to lower oil prices, continued to push back, they said.

The dynamic between Saudi Arabia and Russia is not new: since the alliance of OPEC plus allies was created three years ago, the two sides have disagreed about whether to cut production, often publicly, but have ultimately found a way to compromise.

On Tuesday, the technocrats heard a presentation from China’s ambassador, Wang Qun, and looked at models of how the virus will affect demand.

OPEC’s internal analysis showed a modest drop in global demand growth of about 400,000 barrels a day for about six months even for a worst-case epidemic, according to delegates. If OPEC+ were to maintain its current output reductions throughout that period, there would be a surplus of 600,000 barrels a day in the first quarter and 1 million in the second, the analysis showed.

The committee didn’t discuss on Tuesday whether the group should deepen its cutbacks, delegates said.

Others saw a more severe impact from the virus. BP Plc predicted the outbreak would have a bigger effect, erasing 300,000 to 500,000 barrels a day of consumption for 2020 as a whole. S&P Global Platts said its worst-case scenario was for a hit of about 1 million barrels a day, which would take annual demand growth down to 320,000 barrels a day, the weakest since the 2008 to 2009 financial crisis.

After Tuesday’s meeting, China’s ambassador Wang told reporters that the virus would inevitably affect oil demand, but cautioned against overreacting. Behind closed doors, he told cartel officials that the impact would be limited and localized, said delegates, who asked not to be named because the talks were private.

Iraq, which is OPEC’s second-largest producer but has a poor record of implementing output cuts over the past three years, said it supported a response to the coronavirus.

“There’s definitely a justified worry over what’s happening, given the importance of China as a consumer,” a spokesman from the country’s oil ministry said in a statement. ”We believe that the wisdom of the members of OPEC are capable of containing this crisis in the coming period.”

To contact the editors responsible for this story: Emma Ross-Thomas at erossthomas@bloomberg.net, Carlos Caminada