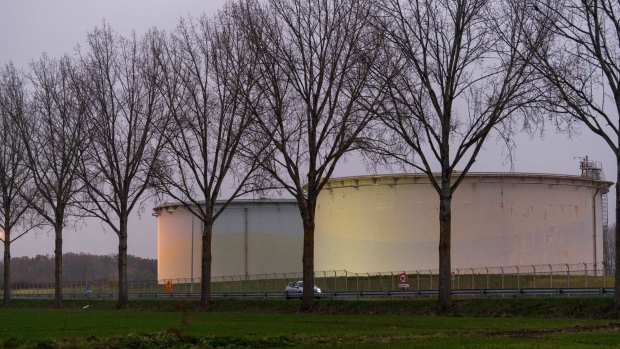 Storage silos at the TotalEnergies SE Grandpuits oil refinery in Grandpuits-Bailly-Carrois, France, on Thursday, Dec. 1, 2022. European Union states are coalescing around a plan to cap the price of Russian crude oil at $60 a barrel, their latest attempt to clinch an agreement before a Monday deadline, according to people familiar with the matter. Photographer: Benjamin Girette/Bloomberg , Bloomberg

(Bloomberg) -- The OPEC+ alliance decided to maintain production at current levels, pausing to take stock of a global oil market that’s roiled by uncertainty over Chinese demand and Russian supply.

The 23-nation group, which held a roughly 20-minute online meeting, has only just started implementing the hefty 2 million barrel-a-day reduction agreed at its last gathering in October. The full impact of that cut is unclear amid severe gyrations in prices. After hitting the lowest level since September on Nov. 28, Brent crude ended up posting its biggest weekly gain in a month.

The volatility has been driven by European Union sanctions and a price cap on crude exports from OPEC+ member Russia, which come into effect on Monday. At the same time, China is tentatively easing the Covid measures that have eroded consumption in the world’s biggest oil importer.

The Organization of Petroleum Exporting Countries and its allies decided earlier this week to hold on online gathering rather than meet in-person at their Vienna headquarters.

(All times are CET)

Moscow will refuse to supply crude and refined products to clients that choose this mechanism, he said.

“We will sell crude and products to the countries that will work with us on market conditions, even if that means we’ll need to cut production,” Novak said after the OPEC+ meeting.

The global crude market is in much better shape two months ago, when OPEC+ held its face-to-face meeting in Vienna, he said. However, many uncertainties remain, including high inflation rates and growing sovereign debt in some countries, as well the continuation of Covid-19 outbreaks in China.

OPEC+’s decision in October to reduce output by 2 million barrels a day -- which angered the US -- was the right one, the group said in its decision statement.

The move was “recognized in retrospect by the market participants to have been the necessary and the right course of action towards stabilizing global oil markets,” the statement read.

Brent climbed to around $97.50 a barrel after that decision. But it’s fallen to $85.57 -- around its lowest since late September -- amid concerns about a global economic slowdown.

“With massive and offsetting fundamental and geopolitical risks bearing down on the oil market, ministers understandably opted to hold steady and hunker down,” said Bob McNally, president of Rapidan Energy and a former White House official.

“The group will continue to monitor markets and should fundamentals deteriorate they will meet prior to June,” said Amrita Sen, chief oil analyst and co-founder of consultants Energy Aspects Ltd.

“Oil markets are likely to stay volatile near-term, driven by news from China and on central bank policy changes,” said Giovanni Staunovo, an analyst at UBS.

Sunday’s decision was driven by uncertainty surrounding the EU cap on prices of Russian crude exports and the easing of China’s Covid restrictions, he said.

OPEC+ Monitoring Committee Back in the Spotlight (1:55 pm)

The OPEC+ decision statement makes it clear that the Joint Ministerial Monitoring Committee, or JMMC, is back in the spotlight.

In the first couple of years after the OPEC+ alliance was founded in late 2016, the JMMC quickly assumed great importance because it met more frequently than the full coalition. Originally with just a handful of countries, its membership expanded as its influence became clear.

The committee’s centrality seemed to recede when OPEC+ shifted to monthly meetings, with the advent of online conferences after the outbreak of Covid in early 2020.

The latest communique suggests the JMMC is taking a more powerful role once again, reaffirming that it will meet every two months while OPEC+ itself gathers just twice per year. And it clarifies the JMMC has the authority to “hold additional meetings, or to request an OPEC and non-OPEC Ministerial Meeting at any time to address market developments if necessary.”

It comes as little surprise that OPEC+ decided to leave output targets unchanged. They were only put in place in October and are meant to last until the end of 2023.

Altering them so soon would have sent a signal that the group’s lost control of the market. The JMMC is due to meet at the start of February, by which time it should have a better idea of the impact of EU sanctions on Russian crude exports and the effect of the price cap. Although that gathering will take place just days before a EU ban on Russian oil products exports comes into force -- and that could be even more destabilizing than the crude ban.

“Faced with a raft of uncertainties on Russian sanctions and the price cap, OPEC has held back for now,” said Bill Farren-Price, head of macro oil and gas research at Enverus.  “But the threat of further cuts is real. The group is in supply management mode.”

OPEC+ has reached an agreement to maintain production at current levels, a delegates said, asking not to be named because the decision isn’t public yet.

The OPEC+ ministerial meeting due to start at 1 p.m. Vienna time will likely be straightforward and quick, according to delegates who declined to be identified.

Most officials are predicting the group will simply ratify existing production targets, with little need for protracted discussions.

The market balances OPEC+ ministers will examine at the monitoring committee -- which just started -- point to a tight first quarter.

A meeting of Joint Technical Committee -- which normally compiles an outlook for ministers -- scheduled for last Friday was canceled, but member nations will still have forecasts from another panel, the Economic Commission Board, which convened last week.

These show daily demand for OPEC’s crude will increase by 390,000 barrels in the first three months of 2023, to an average of 29.31 million, as global consumption picks up. This is considerably above current production levels when the latest cutbacks are factored in. A Bloomberg survey points to output of about 28.8 million barrels a day in November. As a result, OPEC+ could keep production steady and look forward to stockpile draws in the first quarter of roughly 500,000 barrels a day, which may boost prices.

It backs up the prevailing view among delegates that the group can simply roll over existing targets at this conference.

One big change we will see from OPEC+ going forward is in the frequency of their gatherings. Gone are the monthly meetings, which, let’s face it, began to seem rather irrelevant when ministers appeared to focus more on how quickly they could conclude proceedings than on discussion of the imbalances of supply and demand.

Full OPEC+ ministerial gatherings will be held every six months going forward, probably in June and December. There was a period between 1999 and 2010 when OPEC’s meetings were held in March and September, coinciding better with the switch between winter and summer demand patterns.

The Joint Ministerial Monitoring Committee will convene every two months, more frequently if its members feel the need, and can request a full ministerial gathering at any time to address market developments.

The monthly meetings held over the past two years were intended to allow OPEC+ to be more responsive to oil supply and demand changes as the world emerged from the depths of the Covid-19 pandemic. For the most part, though, they merely rubber-stamped an output plan that had been adopted in July 2021 and were frequently wrapped up in under 20 minutes.

Decision Comes Day Before Start of EU Ban on Russian Crude and Price Cap (11:20 am)

OPEC+ is holding its meeting the day before a European Union ban on seaborne crude imports from Russia comes into effect. But don’t expect the group to step in to make up for any crude supply that might be lost as a result of the embargo. Russia remains a key part of the OPEC+ group and the other members won’t take a decision that hurts Moscow’s interests.

If there is any discussion beyond a simple rubber-stamping of the production targets agreed in October, which remain in force until the end of 2023, it is likely to focus on uncertainties around oil demand, with Kuwait warning that it is already seeing reduced requests for next year from some of its customers.

The producers will be far more worried about downside risks to crude prices from weaker demand than they will be about upside risks from any disruption to Russian exports.

Oil Posts Biggest Weekly Gain in a Month as Volatility Spikes (11:00 am)

Oil posted its biggest weekly gain in a month, after a volatile week marked by China loosening Covid restrictions and speculation on OPEC+ output policy.

Brent closed at $85.57 a barrel on Friday. It’s up 10% this year, but down from $123 in June. Since then, fears over a global economic recession have triggered selling among traders.

Volatility at the front of the futures curve jumped above 50% earlier this week, the highest since September. Prices have swung as traders try to anticipate OPEC+’s decision and whether China’s tentative easing of Covid-Zero policies will boost demand in the world’s largest importer of crude.

The gyrations have become too much for many traders to stomach. Open interest for WTI stands at the lowest since 2014 and money managers have slashed bullish bets on both benchmarks for three weeks straight. Analysts say the liquidity crisis will continue as positions continue to be closed out before year end.

Shanghai eased some of its Covid restrictions, joining other top-tier Chinese cities as authorities expand a shift toward reopening the economy. Chinese demand is one of the key factors OPEC+ needs to weigh up as it sets policy.

“We’re really nervous about where demand is going over the next few months and the next year, especially if there is a recession,” Sheikh Nawaf Al-Sabah, chief executive officer of Kuwait Petroleum Corp., said to Bloomberg TV late on Friday. “We’re talking to our customers. They’re saying that they either require the same amount of oil, or they’re asking for slightly less next year.”

The OPEC member exports about 2 million barrels a day of crude, most of it to Asian countries such as China, South Korea, Japan and India.