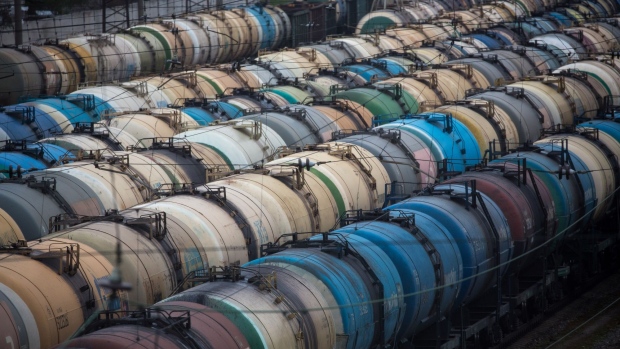 Rail wagons for oil, fuel and liquefied gas cargo stand in sidings at Yanichkino railway station, close to a refinery in Moscow. , Bloomberg

(Bloomberg) -- OPEC and its allies are increasingly inclined to ditch their plan to raise output next week, as a new virus variant triggered oil’s worst crash in over a year.

The 23-nation alliance led by Saudi Arabia is leaning toward abandoning a plan for a modest production hike scheduled for January when it meets on Dec. 1 to 2, according to delegates who declined to be identified. The group was already considering a pause after the U.S. and other consumers announced the release of emergency oil stockpiles on Monday.

“The emergence of a new Covid variant that could spawn renewed shutdowns and travel restrictions is precisely the type of change in market conditions that could cause ministers to deviate from their plan” to add barrels, said Bob McNally, president of consultant Rapidan Energy Group and a former White House official.

Crude futures sank more than 10% in both London and New York on fears that the new coronavirus variant identified in South Africa could scuttle the fragile economic recovery.

The Organization of Petroleum Exporting Countries and its partners are due to add another 400,000 barrels a day in January as they gradually revive output halted during the pandemic last year. They were already considering pausing that after President Joe Biden orchestrated a multi-national deployment of strategic oil stocks in order to tame gasoline prices and rampant inflation.

Saudi Arabian Energy Minister Prince Abdulaziz bin Salman has warned that global crude markets are poised to return to surplus next month, and that demand is at risk from new infections. OPEC’s internal research shows a substantial excess forming early next year, that will only balloon if the U.S. and its associates tap their strategic reserves.

Until now, withholding additional barrels while the U.S. and others called out for them would have been a politically fraught move, fraying an already-fragile relationship between Riyadh and Washington.

The emergence of the new virus off-shoot, with its obvious risks to fuel consumption, could make an output freeze much easier to defend. UBS AG has even suggested that the group could consider an output cut.

Still, it’s unclear whether such a hiatus would receive full backing from the group, which meets each month to review the restoration of suspended output in gentle increments. Members like Russia and the United Arab Emirates are often eager to press on with resuming exports.