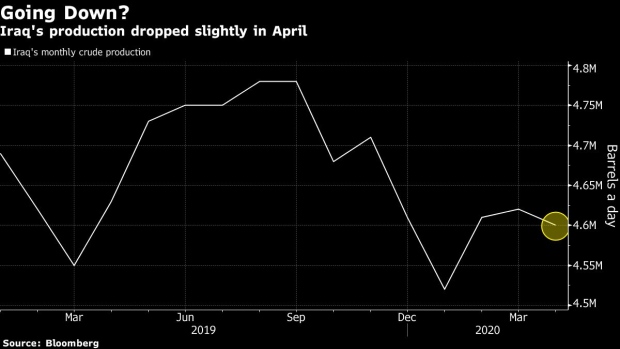 (Bloomberg) -- Iraq is taking the lead in cutting oil supply to the prized Asian market as the global deal to curb output kicks in, an unusual move for OPEC’s second-biggest producer.

State-owned oil marketer SOMO told at least three Asian customers they won’t get the full contractual volumes they had asked for in June, with one of them getting a reduction of more than 30%, according to traders who were informed by the company. Two other buyers in the region said they were given the supplies they had requested. SOMO didn’t immediately respond to an email seeking comment outside of regular office hours.

It’s rare for Iraq to comply with OPEC production cuts and even more unusual for it to lead the way in doing so. The country was taken to task last year for not fully implementing reductions, while Saudi Arabia, the group’s biggest producer, has typically shouldered more than its share of the burden.

One reason that SOMO is out of the gate first with allocations is that Saudi Aramco, which normally provides this information around the 10th of each month, is late this time. Nevertheless, Iraq’s approach signals that OPEC and its allies may be taking this round of cuts more seriously than they have in the past due to the demand devastation that’s been wrought by the coronavirus.

Kuwait, another OPEC member, will also be supplying less to Asian buyers in June and the cuts will remain in place until December. In an additional measure, Kuwait Petroleum Corp. told customers that a minus 5% operational tolerance limit will be applied to all cargoes nominated for June loading, according to a copy of the notice seen by Bloomberg.