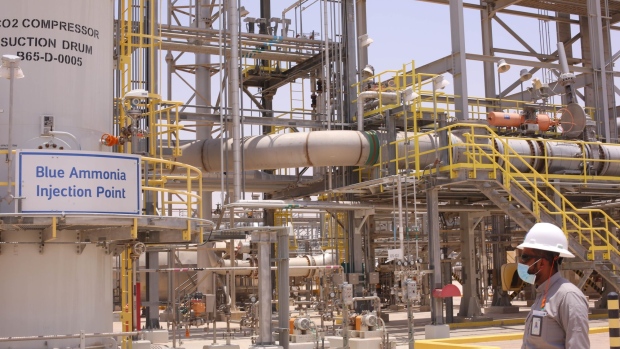 Visitors during a media tour of the Khurais Processing Department in the Khurais oil field in Khurais, Saudi Arabia, on Monday, June 28, 2021. The Khurais oil field was built as a fully connected and intelligent field, with thousands of sensors covering oil wells spread over 150km x 40km in order to increase the efficiency of the plant and reduce emississions, according to a Saudi Aramco statement released to the media. , Bloomberg

(Bloomberg) -- OPEC boosted oil production last month by the most in a year, in line with plans to meet rising demand as countries recover from the pandemic.

The Organization of Petroleum Exporting Countries production rose by 855,000 barrels a day in June to 26.47 million a day, with just over half the increase coming from group leader Saudi Arabia, Bloomberg survey showed.

As global fuel consumption bounces back in the U.S., Europe and parts of Asia, the cartel and its partners are gradually reviving output shuttered during the start of the pandemic last year.

OPEC and its allies’ next move, however, remains mired in uncertainty. Talks to increase supply further beyond August ended acrimoniously on Thursday following surprise opposition from the United Arab Emirates regarding its quota. The standoff remained unresolved early Friday, but the alliance is scheduled to return to talks later in the day in an attempt to break the deadlock.

Last month all but one of OPEC’s 13 members increased supplies, the survey showed. Saudi Arabia -- which made the lion’s share of cutbacks when the market was ailing -- bolstered output by 490,000 barrels a day to 8.95 million a day.

Even countries that have wrestled with sanctions, such as Iran, or economic and industrial crisis like Venezuela, found a way to add barrels in June, according to the survey.

Figures are based on ship-tracking data, information from officials, and estimates from consultants including Rystad Energy AS, JBC Energy GmbH and SVB Energy International LLC.

The full OPEC+ alliance, which includes non-members like Russia, is now contemplating tapping more of its idled capacity as the demand recovery gathers pace. Some customers like India have complained that the coalition isn’t reviving supplies quickly enough. International benchmark Brent remains near the highest in more than two years at above $75 a barrel.

On Thursday, the 23 OPEC+ countries had been finalizing a plan to restore a further 2 million barrels of daily output in five monthly installments. The negotiations sputtered when the UAE raised an objection over its quota, which Abu Dhabi says is outdated.