OPEC talks ended without an agreement on delaying next-year’s oil-output hike, with ministers punting the final decision into a second day of discussions as tensions in the cartel simmered.

The coalition is debating whether to maintain its supply cuts at current levels, or increase output as planned next year. Market-watchers have been expecting a delay -- and if the group doesn’t deliver, prices will suffer.

After a video conference lasting about four hours, there had been no opposition to the proposed delay, but delegates said there was still no consensus about the precise terms of the extension. Still unresolved were questions of members’ compliance with pledged cuts, and compensation from countries that have previously exceeded their supply limits.

At stake also is the credibility of the cartel whose actions have underpinned the market since the spectacular oil crash earlier this year. The run-up to the meeting has been marked by new cracks emerging in the relationship between the United Arab Emirates -- a core part of the cartel -- and other members.

Saudi Arabia’s Energy Minister Prince Abdulaziz Bin Salman signaled his dissatisfaction with the situation on Monday by telling others he may resign as co-chair of a committee that oversees the OPEC+ deal. 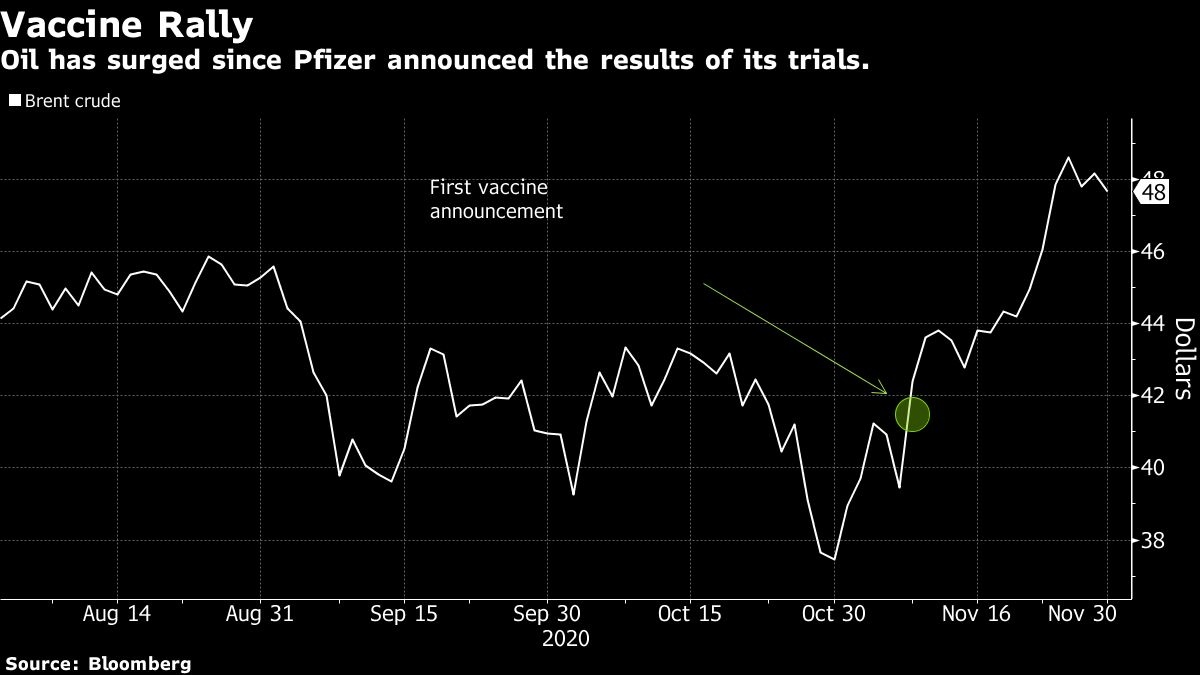 In a speech at the meeting’s opening session, Algerian Energy Minister Abdelmadjid Attar indicated a preference for a delay. He was later quoted by Algeria’s state news agency saying there was consensus, and he was optimistic there would be an agreement to maintain the current cuts through the first quarter.

“We must be aware today that the market conditions of 2020 are likely to continue during the first quarter of 2021,” said Attar, who holds OPEC’s rotating presidency. “We must be cautious.”

Other options that have been floated are a two-month delay, and the possibility of gradually increasing output over a period of three or four months. 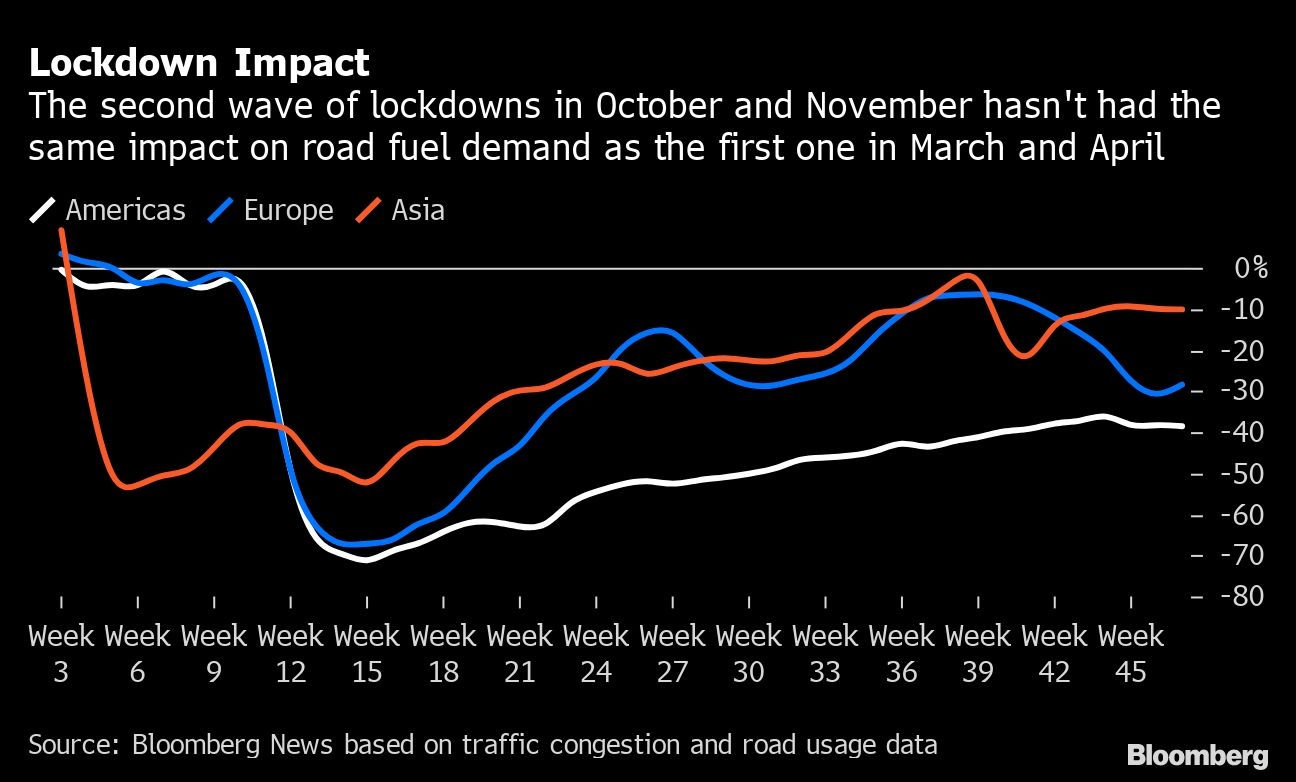 Producers held informal discussions on Sunday evening, where most of them had supported maintaining the existing curbs into the first quarter. But the plan didn’t get backing from two of the coalition’s major players: the UAE and Kazakhstan, delegates said.

Tensions have emerged between the UAE and the Saudis, traditionally stalwart partners. Abu Dhabi has grown impatient to use its new production capacity, while also planning to launch a regional oil benchmark contract. The country hasn’t commented publicly on its stance, and officials said before Monday’s meeting that they hadn’t decided on a position.

Kazakhstan is ready to discuss its position, according to a person familiar with the country’s oil policy. The Kazakh Energy Ministry declined to comment.

Several delegates predicted that OPEC+ would eventually find a compromise that works for everyone, as is usually the case for the group.

“There is still a broad desire within OPEC+ to balance the market,” said Bill Farren-Price, a director at research firm Enverus. “While there are options on the table, there is no oven-ready deal.”

If that consensus can’t be achieved, the existing agreement allows members to add 1.9 million barrels a day to world markets, potentially derailing the recent rebound in crude prices. Brent futures are trading near US$47 a barrel in London. Crude could fall by about US$5 if OPEC+ doesn’t delay the production increase, according to Goldman Sachs Group Inc.

OPEC+ made vast production cuts during the depths of the pandemic to offset a historic collapse in fuel demand. The alliance had planned to ease some of those curbs at the start of 2021, in anticipation of a global economic recovery. Over the past few weeks, leading figures in the alliance such as Saudi Prince Abdulaziz and Russian Deputy Prime Minister Alexander Novak have signaled support for delaying that supply increase.

While a breakthrough in vaccines to tackle the coronavirus propelled oil prices to an eight-month high, a resurgence in infections has triggered a new wave of lockdowns and inflicted a fresh blow to fuel consumption. The cartel and the wider industry have downgraded their outlooks for 2021, with a picture that’s sharply polarized between recovery in Asia and stagnation in Europe.

Yet Abu Dhabi has so far withheld its blessing for a delay, with Energy Minister Suhail Al-Mazrouei repeating his position that many countries still haven’t implemented the supply cuts they’ve been obligated to make for months, delegates said.

That may have been a pointed reference to the Saudis’ treatment of the UAE during the summer, when Mazrouei was summoned to Riyadh and given a public rebuke for his own overproduction. The country has since delivered the required compensatory curbs, but other laggards like Iraq and Nigeria haven’t.

The Emirates’ frustration flared two weeks ago, when officials signaled privately that they were dissatisfied with the quota assigned to them by OPEC, and were even contemplating leaving the organization in the long term. Iraq and Nigeria have also grumbled about their output limits.

“It won’t be an easy meeting,” Iranian Oil Minister Bijan Namdar Zanganeh told the Shana news agency. “Some are opposed to extending the previous decision, and this makes matters more difficult.”