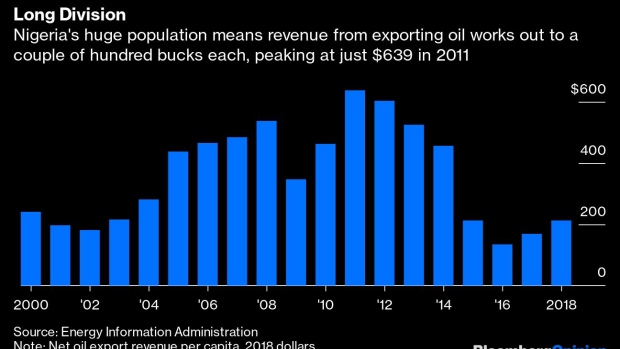 (Bloomberg Opinion) -- Like people, whole countries can have pre-existing conditions. A particularly insidious one is oil dependency, which can leave a state destitute at the very moment it requires all its strength. In recent years, crises in Venezuela and Libya have sent shockwaves through the global oil market. The country to watch in this year of Covid-19 is Nigeria.

Late last month, the International Monetary Fund approved $3.4 billion of emergency funding for Nigeria. Official figures suggest the spread of Covid-19 there has been low. But as analysts at the Council on Foreign Relations point out, only about 12,000 Nigerians out of a population of more than 200 million had been tested as of two weeks ago. Last month, the disease claimed Abba Kyari, the powerful chief of staff to President Muhammadu Buhari, a political bombshell. Meanwhile, there is no denying the pandemic’s impact on oil, which accounts for roughly 10% of Nigeria’s economy (more on that figure below).

While Nigeria has supplied more secretary generals of OPEC than any other country — including the current one — it is also among the group’s weakest members. Nigeria has ranked lowest within OPEC in terms of oil export revenue per capita virtually every year this century.(1)

As Nigeria’s population swelled, oil production dwindled. Helima Croft, a former CIA analyst who now heads global commodity strategy at RBC Capital Markets, recalls the years just after the 9/11 attacks. Nigeria, having recently transitioned out of military rule, was regarded as a potential “fulcrum of U.S. energy policy,” supplying more barrels from outside the Middle East. Back then, it produced more than two million barrels a day, of which about 40% was shipped to the U.S., and Croft remembers projections at the time for production to double.

Things didn’t work out that way.

“Nigeria’s challenge, that pre-dates Covid by at least a decade, is lack of investment in the oil sector in Nigeria,” says Matthew Page, an associate fellow at Chatham House, a London-based think tank, and former U.S. intelligence expert on Nigeria. Unrest in the Niger Delta since the 1990s intensified after 2003 with attacks directed increasingly at oil infrastructure. This, combined with persistent corruption, deterred foreign oil companies(2). By the mid-2010s, with shale oil starting to transform the Atlantic oil market, there was even less reason to invest in Nigerian barrels. President George W. Bush was the last U.S. president to visit a country whose oil supply is no longer viewed in Washington as critical; President Donald Trump slapped immigration restrictions on Nigeria in February. The Covid-19 crisis, coming amid mounting expectations of peak oil demand anyway, means even less incentive for foreign oil companies to deploy scarce dollars there.

Oil sits at the nexus of Nigeria’s politics, economy and security. Even though it accounts for only about one-tenth of GDP, it generates more than half of government revenue. And government revenue can also be thought of as a form of oil, greasing the complex machine that is Nigeria: more than 200 million people split among more than 300 ethnic groups(3), encompassing Islam and Christianity and spread across 36 states. While the economy is relatively diversified, many Nigerians rely on subsistence farming or work for the civil service. Nigeria is estimated to account for one in seven of the world’s very poorest people.(4) Outside of Lagos, large parts of the country rely heavily on oil-funded allocations from central government. Peace deals with militant groups are sealed with cash. And the government funds security forces fighting Boko Haram’s jihadists in the northeast of the country.

“Where this becomes problematic, in terms of socio-political dynamics, is that oil money is one way in which Nigeria smooths over its poor governance and its lack of services,” says Judd Devermont, who directs the Africa Program at the Center for Strategic and International Studies, a Washington-based think tank. “Nigeria’s always been very effective at managing one or two crises at a time,” he adds — before listing the current slate of issues: the oil crash, Covid-19, Boko Haram, clashes between farmers and herders in Nigeria’s middle belt, an uptick in unrest in the northwest.

Despite its fault lines and weaknesses, Nigeria has endured multiple crises in the past. What’s different this time is the sheer multiplicity of problems against a backdrop of weak oil prices — and at a time when the medium and long-term health of the oil market is already in question. In a forthcoming essay for Chatham House, Page lays out a grim set of cascading effects whereby the government, with all of $72 million in its rainy-day fund, can’t cut checks to state governments, which in turn can’t pay the obligations they’ve built up on the back of oil money. And it’s all too easy to imagine a vicious circle developing whereby the government struggles to pay off militants in the Delta region, who then resort to the old tactic of disrupting oil supply, thereby exacerbating the lack of funds.

The risk of economic and political disruption in Africa’s biggest oil exporter is rising. Today’s market, choking on its own supply, may not particularly care right now.

But Nigeria’s situation, although it reflects the country’s unique characteristics, also shares something in common with other petro-states. It’s an inherently fragile system — beset by corruption, regular bouts of violence, economic mismanagement and weak institutions — that has been held together with oil rents. At the other end of the scale, Saudi Arabia has a far healthier oil industry; a more cohesive state; a smaller, wealthier population; and a giant rainy-day fund. Yet it also faces potentially existential challenges to its oil-funded model.

The crisis for Nigeria isn’t so much that oil prices are low; rather that it is hardwired for much higher prices. The oil market’s slow-burning crisis is that so much of its supply depends on such countries.

(2) Nigeria ranked 146 out of 180 in Transparency International's "Corruption Perceptions Index 2019."

(3) The three largest - the Hausa/Fulani, Yoruba and Igbo - account for about half the population. (Source: "Nigeria: What Everyone Needs To Know" (Oxford University Press, 2018).